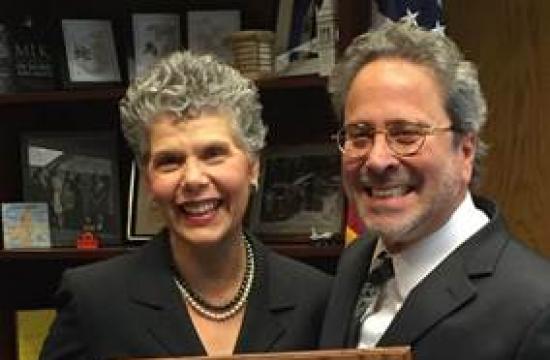 Assemblymember Richard Bloom (D-Santa Monica) today announced that Elaine Polachek, a long-time administrator with the City of Santa Monica, has been chosen as the 2016 “Woman of the Year” for the 50th Assembly District.

Ms. Polachek will be honored along with 77 other women around the state selected by their Assembly representatives in a ceremony held on the Assembly Floor of the State Capitol on Monday, March 14th.

“Ms. Polachek demonstrate the intelligence, integrity, and resolve that we all look for in a public servant,” said Bloom.  “But more than that, as a woman in city leadership, she has been a trailblazer in what has traditionally been a male-dominated profession.  She is an inspiration for woman of all ages as our society continues to break down barriers and inequalities.”

A resident of the City of West Hollywood, Elaine Polachek is currently the Assistant City Manager for the City of Santa Monica where she supervises eleven city departments and leads the City’s economic development efforts.  In this role, she focuses on developing, enhancing, and sustaining relations with residents and key business partners such as the Santa Monica Chamber of Commerce, Convention and Visitors Bureau, Downtown Santa Monica, Inc., and the Pier Corporation.   With over 30 years of public administration experience, she has served in several key positions with the City.

“I’m deeply touched by Assembly member Bloom’s invitation to represent the 50th District as Woman of the Year,” said Elaine Polachek.  “It’s been an honor to serve the community of Santa Monica for 27 years and receiving this acknowledgement with the other distinguished women being recognized, is a hallmark in my career.”

In 2014, Ms. Polachek received the John H. Nail Award from the League of California Cities.  This award is presented to outstanding municipal leaders who have contributed significantly to their city and to the advancement of the community as a whole.

Ms. Polachek previously served as Deputy City Manager, Director of Community Maintenance, and Open Space Manager with the City of Santa Monica. Other noteworthy past positions for Ms. Polachek include Vice President of Marketing at the Pacific Design Center, and Operations Manager for the Pier Restoration Corporation, where she played a key role in the redevelopment of the Santa Monica Pier from 1984 to 1995. She has also served in management positions with the Province of Ontario and the City of Scottsdale, Arizona.

This year marks the 30th anniversary of the Woman of the Year event at the State Capitol that began in 1987 to celebrate the contributions to society by remarkable women throughout the state. This annual event, sponsored and organized by the Legislative Women’s Caucus, honors women who selflessly contribute to their communities.