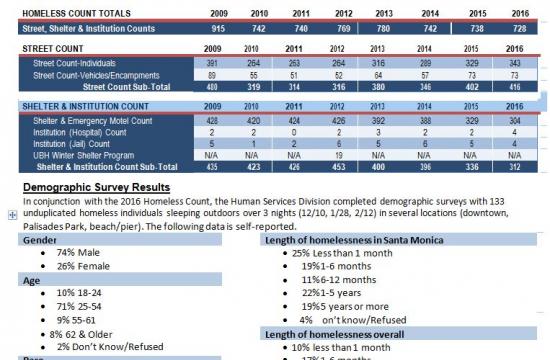 The City of Santa Monica conducted its annual Homeless Count on the night of January 27, 2016.

The results below were presented at the City Council meeting this evening.

·         Within the street count, individuals sleeping in vehicles/encampments remained equal to number found in 2015, with 73 counted.

While the total number of homeless individuals identified in the count continues to incrementally decline, the number of unsheltered individuals has been slowly increasing.

This is reflective of the increasing numbers across LA County, where, between 2009 and 2015, homelessness overall has increased by 15%, with the number of unsheltered individuals increasing by 23%.

The street count did not identify any unsheltered families or minors. The results of Santa Monica’s count will be further informed by the results of the County-wide counts conducted during the last week of January.

Those results are scheduled to be released later this year by the Los Angeles Homeless Services Authority.

This year, in addition to counting individuals, City staff and volunteers conducted brief surveys of unsheltered individuals over three nights in several locations including downtown, Palisades Park and the beach.

Their relatively short stay in Santa Monica is contrasted by the length of their homeless experience overall, with 62% of respondents reporting to be homeless for 1 year or more, nearly half of whom reported being homeless for five years or more.

This increasingly transitory population and the extended chronicity of their homeless experience may also be contributing to a reduction in the use of local shelters, which is reflected in the steady decline in the number of individuals in shelters since 2013.

Homeless counts are mandated every two years by the U.S. Department of Housing and Urban Development. Santa Monica counts annually to rapidly identify and respond to changing population trends.

To conduct the Count, over 250 community volunteers and City staff covered each street in Santa Monica – a total of 226 linear miles – to tally homeless individuals sleeping outdoors, as well as in cars, RVs, and tents.

Homeless persons in shelters, jails and hospitals were also counted at each facility.

The City’s response to homelessness continues to be guided by the Action Plan to Address Homelessness, implemented by the City in 2008, which has helped to maintain reductions in homelessness achieved in 2010 while homelessness has increased across the region.

The City Council affirmed their commitment to this issue by identifying homelessness as one of the five Council adopted strategic goals. An interdepartmental work group will be re- evaluating The Action Plan for update which will include new approaches to address the changing homeless population, as identified in the data from Homeless Count and surveys.

More information about the event and the City’s homeless initiatives: smgov.net/homelessness