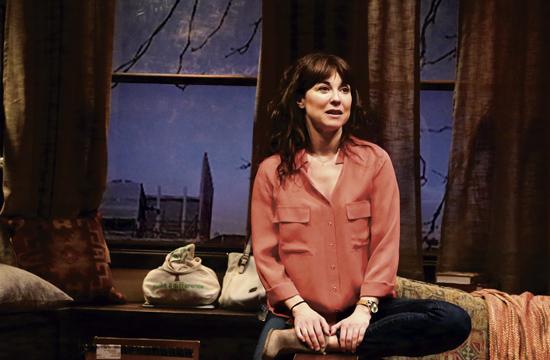 It was a cold and snowy night in the Michigan countryside. Olivia (Rebecca Pidgeon) is curled up on a couch in the living room of a bed and breakfast, which serves as a writers’ retreat. She seems to be proofing a manuscript and because of the inclement weather, is not expecting anyone else to arrive. Her first book received mixed reviews from which she never recovered, ultimately retreating into the safe cocoon of teaching. So begins Laura Eason’s play with the alluring title of “Sex with Strangers” raising expectations of witnessing some juicy sex between two consenting adults. I feel it my duty to warn you to lower your expectations.

We hear the sound of an approaching car. It stops. Headlights are turned off and we listen to the crunching sound of someone walking through the snow followed by a knock on the front door. (Nice sound design by Cricket S. Myers) In comes Ethan (Stephen Louis Grush,) a 28-year old best-selling author who has written two books – “Sex with Strangers,” and “More Sex With Strangers,” both of which recount his numerous sexual conquests. The books emanated from a wager he made with a friend that he could seduce one woman a week. Ethan receives a chilly welcome from Olivia, who insists that he leave. He explains who he is and that his book occupied a spot on the New York Times Best Seller list for five years and has been optioned for a film. Olivia, in her late thirties, has been avoiding eye contact and delivers her lines directly to the audience, facing away from Ethan, which one would think was her way of avoiding him. He calms Olivia down by telling her he read her book and thought it was brilliant. Nothing like a few compliments to defrost the chill. He is finally given permission to stay. This unexpected visitor continues gushing about her work and it appears that he is on a mission to resurrect her novel. His idea is to republish online using a pen name to see what the response would be.

Unfortunately, it soon becomes clear that Pidgeon continues to avoid eye contact most of the time and is delivering nothing more than line readings – the kind you would deliver sitting around a table at a “read.”  She would say her line in a stilted, abrupt, monotone manner and wait for the next line without really connecting with Grush, who is actually giving an excellent characterization as Ethan. It was like watching two different plays – one with a professional performance – the other far short of reaching that level. Anyway, he tells her that he has a half million followers on Twitter which finally convinces Olivia that it would be beneficial to put her failed book online under the name E.S. Thorne. They drink wine and with appropriate mood lighting by Joshua Epstein, we are suppose to see their raging passion through several sex positions. Director Kimberly Senior has them kissing on the couch, has Ethan pinning Olivia against the wall, and then she has them exit stage left to an unseen bedroom. The lovemaking was very mechanical and devoid of any perceivable passion. That same blocking was used at least three times in ensuing love scenes. Another piece of bad blocking was having Ethan sitting in an easy chair with his back to the in-the-round audience seated in the center section where we could only see the back of his head. Anyway, with an entire weekend before them and no television or Wi-Fi, the supposed sexual attraction gets stronger and stronger. Now they are spending their time either talking about books or screwing like two little rabbits, the execution of which was stagey at best.

In all fairness, it should be pointed out that Grush gave a marvelous performance, creating his own motivation as not much was coming back from Pidegon. He found the subtest of Ethan’s character creating enough doubt as to his real motivation. Why did really want to help Olivia? Was he really attracted to her or was he using sex to achieve a hidden agenda? Act I ends with Ethan jetting off to Los Angeles to discuss his film.

Act II takes place in Olivia’s apartment in Chicago, which looks exactly like the living room at the bed and breakfast. Set designer Sibyl Wickersheimer could have made a few minor changes like at least rearranging the furniture to create a different setting. Anyway, Olivia has met with Ethan’s agent who wants to represent her manuscript. Ethan wants her to self-publish on his new website. She wants to hold a real book in her hands. Ultimately, she makes a decision that speaks to the real nature of her character.

Following another business trip, this time to New York, Ethan flies to Chicago to see her. Could his professed love be the real deal? At first, Olivia is happy to see him, but in a questionable transition, goes into a tirade about his books, which she finally read. He insists that he no longer that seducer of women and that he loves her. This scene is Pidgeon’s only true moment in the play. She transcended line readings and her stilted delivery and actually exhibited some believable emotions, something director Senior, who has impressive credits, should have elicited from her throughout the play.

The ideas Eason explores, with varying degrees of success, are complex. They range from adapting to the digital age and a relationship between a younger man and an older woman, to moving on despite past failures and the changeability of loyalty.  Her interesting material deserves a more fulfilling production.