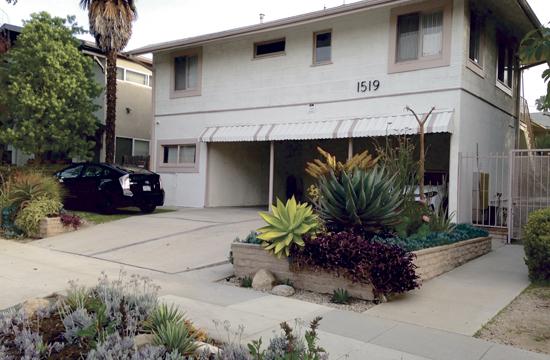 A resident of 1519 12th Santa Monica is breathing a sigh of relief today after being awarded a total $825,000 by Los Angeles Superior Court after suing his landlords for public disclosure of private facts.

The tenant was taken away in October 2013 on a 51-50 hold. Following the incident, his landlords posted a notification on fellow residents’ doors, informing every one of the event, and in doing so, breaking the law and shaming the tenant.

Attorney Frances Campbell, from Campbell & Farahani, represented the tenant under the Legal Aid Foundation of Los Angeles (Santa Monica) and told The Mirror that the now 82-year-old man had been a victim of constant harassment from his landlords who made obvious attempts to evict him from his rent control apartment and home of 34 years.

“Achieving a verdict where two landlords have to pay $825,000 to their tenant because they publicly disclosed his private mental health information to other tenants sends a strong message to Santa Monica landlords that the local community will not support, and in fact will punish, tenant harassment,” Campbell said.

The tenant was awarded $200,000 as a compensatory payment for past and future emotional distress. Landlords Joyce Urode and Kelli Urode were also ordered to pay $500,000 and $125,000 respectively in punitive damages.

With increasing demand for housing in Santa Monica pushing up rents dramatically, more and more landlords who own rent-stabilized properties are implementing near-desperate plans to evict long-term tenants, Campbell said.

Tenants are able to utilize the protections of the Santa Monica Tenant Harassment Ordinance to combat these situations should they arise.

“We have seen eviction attempts against tenants who have paid themselves to improve the landlord’s properties, by putting in granite countertops or hardwood floors, on the ground that the improvements were not authorized,” Campbell explained. “We have seen landlords attempt to evict for a tenant changing a shower head to low-flow; we have seen landlords attempt to evict a tenant because the tenant calls the police to report their neighbors playing loud music.”

All tenants need to be vigilant about protecting their rights, particularly where they pay far-below-market rents, Campbell advised.

“Tenants should make sure all communications with their landlords are in writing,” she said. “If a landlord violates their privacy rights, or harasses them, they need to take action either by suing their landlords in small claims court, hiring private counsel to sue their landlords or by complaining to the Santa Monica City Attorney’s Office.”

As for the gentleman who won his case, he is current residing in a skilled nursing facility, but plans to return to his apartment home in the near future.

Here is a link to the letter