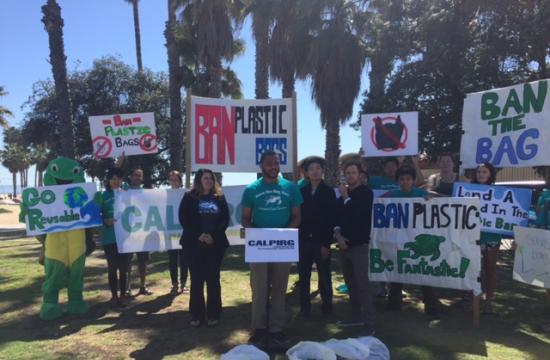 UC students from eight campuses traveled the state during an alternative spring break to build support for the 2016 ballot initiative to save California’s ban on single-use plastic bags yesterday.

Motivated by a love for the environment and a commitment to protecting the ocean and marine wildlife, 30 students from CALPIRG, the California Student Public Interest Research Group chapters, stretching from UC Berkeley to UC San Diego, traveled the state during an alternative spring break to clean up beaches and rivers, and encourage voters to vote yes in November to Save the Bag Ban. The students stopped at Santa Monica Beach and joined Santa Monica Mayor Tony Vazquez and Heal the Bay Senior Coastal Policy Manger for Heal the Bay Dana Roeber Murray, who pledged their support for the initiative.

Students came to the beach to deliver a message: “Students care about California and our oceans. We shouldn’t let something we use for a few minutes pollute our environment for decades. That’s why we need to save the bag ban. To do that, we are going to register tens of thousands of voters, make hundreds of announcements in classrooms, and do an alternative spring break traveling the state to build support for a yes vote in November,” said Jackie Mak, CALPIRG Save the Bag Ban Campaign Media Coordinator and Senior at UCLA.

According to Californians Against Waste, millions of plastic bags pollute the oceans every year. The bags do not biodegrade, and instead break into small pieces that fish, whales and sea turtles mistake for food. Kristoff Almásy, senior at UCLA and CALPIRG Save the Bag Ban Campaign Coordinator said, “As young people, we care a lot about the environment and protecting our oceans. Experts from the World Economic Forum have warned that we are on track to have more plastic in the oceans than fish by 2050. We won’t stand for that.”

147 cities and counties have already passed local bag bans, and Governor Brown signed a statewide ban on single use plastic bags, SB-270 written by Senators Padilla, DeLeon, and Lara, in 2014. Soon after signing the bill into law, several plastics companies poured millions into a campaign fund to repeal the ban. The ballot measure put the statewide law on hold until voters decide in November.

“I feel really excited and energetic that we have a lot of young people, especially college students, that are excited to turn out in November. I’m hoping that with this energy we can turn out a new progressive young vote, “ said Santa Monic Mayor Mayor Tony Vazquez.

The students also spent the week doing direct service by cleaning up local rivers and beaches across the state.