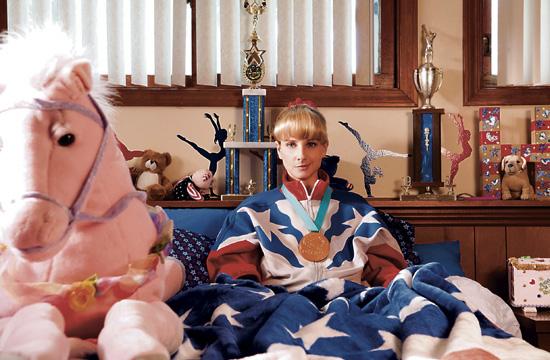 In the Sylvester Stallone tradition of writing and creating an acting vehicle for himself, Melissa Rauch with Winston Rauch, wrote “The Bronze,” with the starring role of Hope Ann Greggory written for Miss Rauch. However, that’s where the similarity ends, as Stallone is a fine actor and his Rocky films are quite memorable. Unfortunately, in this case the script is formulaic and Rauch’s characterization as Hope Ann Greggory is far from a winning performance.

Here’s the storyline: A former member of the U.S. Olympic Team, Hope’s fame sprung from a gymnastic routine she executed with a ruptured Achilles heel, winning a Bronze medal. Years have passed and the former America’s sweetheart is angry and directionless, spending her days either in her father’s basement or parading around her hometown of Amherst, Ohio wearing a U.S.A. sweat suit, which was basically the extent of her costume wardrobe.

For the first third of the film, she behaves in a most despicable, vicious manner without one redeeming characteristic that would not make you care even an iota about her. She snarls at everyone unfortunate enough to cross her path. Her unending verbal abuse is mainly directed at her saintly dad Stan appropriately played by Gary Cole. Dad overindulges her and puts up with her foul mouth and screaming temper tantrums. A most unpleasant demeanor is heightened by her strident voice – much like scraping chalk on a blackboard. In addition, there is really no reason to watch this film after the first half hour, as again the script is quite formulaic and telegraphs the eventual transition of her character into a somewhat decent human being.

That said, here’s what happens: In an effort to give Hope some direction, dad cooks up a scheme to have his daughter coach a young Olympic hopeful named Maggie, played by Haley Lu Richardson. There is supposedly a considerable monetary reward awaiting Hope if she prepares young Maggie for her qualifying Olympic trials. So, here comes the really naïve, beyond innocent, young woman who worships this thoroughly unlikable human being. It’s no surprise that Hope plans to sabotage this lovely young thing and embarks on a series of really disgusting actions. She insists that her protégée eat all sorts of junk foods, which she says, “Will help bulk you up,” but of course results in Maggie gaining too much weight. In one of her more despicable acts, this vixen from hell mixes an “energy drink,” spiking it with a considerable amount of pot. Maggie gets stoned and fails her qualifying trials. However, Lance, the head coach believably played by Sebastian Stan, is familiar with Maggie’s ability and wants to take over her training. Threatened by the thought of losing her financial pay-off, Hope has her “come to Jesus” moment and reluctantly does the right thing.

There are some interesting gymnastic scenes, but the one saving grace of this film is the excellent, layered performances given by Thomas Middleditch as Ben, (Twitchy) a young man who owns a popular gym and for some unfathomable reason, actually has a crush on Hope.

While I applaud the ambition of creating a vehicle in which to have the starring role, one must begin with a good narrative, followed by believable acting. I don’t know if it would have made a difference in the final cut if the lead role were played by a more skilled actress, who perhaps might have found different dimensions to the character beyond screaming, but even this poor script would have been better served by casting a more versatile actress.

Of course, weak narrative aside, a lot of blame must be placed squarely on the shoulders of director Bryan Buckley who should have figured out a way to shape Rauch’s performance. Even the most despicable character should have something at its core to make us care even a shred about what happens to it. Instead, what we have in Hope, is someone who we could care less about.