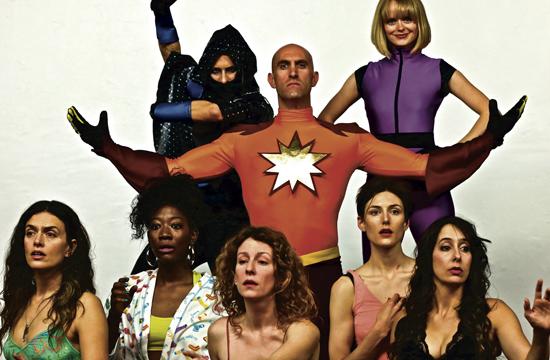 A wonderfully absurd and deeply philosophical hero story dramatized in the world of the graphic novel, the premiere of “The SuperHero and his Charming Wife” is billed as an entertaining wild journey into our fear of the unknown, and opens in Santa Monica April 15.

Inspired by archetype and dreams, “The SuperHero and his Charming Wife” is an original story of a career SuperHero whose marriage collapses when his wife develops the surprising ability to transform into other women. Devoted to security and order, the Hero discovers that he is terrified of change. He struggles to defend his sense of identity, to hold his ground at any cost, and finally to accept the loss, collapse, and revelation that come to pass.

“I chose to make “The SuperHero and his Charming Wife” an adventure comic book in order to make high stakes action out of basic human struggles,” artistic director Aaron Hendry explained. “It is a play about fear of the unknown and how that fear can control our lives, growing into all sorts of terrors and anxieties that may not be real. It seeks to be wildly ridiculous and at the same time deeply human.”

The Hero, a man renowned for courage in the face of danger, is forced to confront his deep terror of chaos, change

and losing control. In search of her own identity, the Hero’s wife discovers a dark side of herself that she was not prepared to face. It is a wild journey into our fear of the unknown in our relationships, and in ourselves – an exploration of fluidity versus consistency and the polarization of masculine and feminine.

Rooted in NMA’s passion for the classics, “The SuperHero and his Charming Wife” is modern mythology. A mix of the Jungian archetype with the Eastern spiritual warrior, a Hero’s tale for a pop-culture age. A philosophical and psychological journey balanced with modern action, music, and absurd humor.

Known for their athletic, intense modern versions of Shakespeare, NMA creates original theatre experiences or reexamine classics from the physical tradition of Grotowski, Meyerhold and the dance theatre world, then to share that work both nationally and internationally.