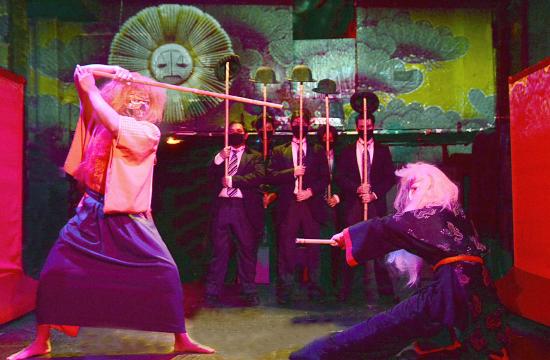 After sitting through some unsatisfying evenings of theatre, every once in a while I see a production that leaves me emotionally moved, reminding me of why I love the potential magic of theatre. Last year it was the stunning production of “Spring Awakening” by Deaf West Theatre, which went on to New York. Right up there is the brilliant production of the world premiere of “Blood,” produced by the newly formed company, The Garage, and currently on stage at The Complex.

Award-winning director extraordinaire Robert Allan Ackerman collaborated with a group of very talented young actors, work shopping the source material, which evolved into this riveting, highly stylized political thriller with fabulous original music and songs by Nick Ackerman and Chris Cester. The sound design by Joseph “Sloe” Slawinski often is a comedic counterbalance to the unfolding drama. The story, part fact and part fiction, revolves around a scandal in Japan that most Americans never heard of. In the early 1980s an American pharmaceutical company knowingly sold HIV infected blood to Japan with instructions to heat the blood, which would supposedly destroy the virus. The Ministry of Health claimed that Japanese blood was immune to the virus and refused to issue orders to heat the blood. Subsequently, it was distributed to many hospitals, causing the deaths of 2,000 people, predominantly hemophiliacs, who contracted AIDS.

The play begins in the tradition of Kubuki Theatre, where the rapid clapping of two hardwood sticks called clappers,(hyoshigi) played by Taishin Takibayashi, signals the start of the play. They were sounded again at the beginning of Act II.  We are introduced to a Jewish-American free-lance journalist named Jules, well played by Alexa Hamilton, who has returned to Japan following the death of her nine-year-old son Noah who was killed in a freak car accident. She is good friends with a former student named Ken (Takuma Anzai) who becomes ill following a series of transfusions and subsequently dies. The hospital, which has assigned numbers instead of names to their HIV patients, refuses to do an autopsy, which sets in motion her pursuit of the truth of what killed her young friend. Even as more and more people begin to die from AIDS, none of the victims’ families come forward. They are ashamed and don’t want to cause any trouble. There is also the inherent respect for authorities, which further impacts on their reluctance to confront the government’s decision to not purify the blood. Deaths are spreading throughout the country and hospitals are involved in the cover-up.

Eventually, Yoji Kurosawa a young Korean attorney, nicely portrayed by Sohee Park, reluctantly begins to work with Jules. They enlist the assistance of Eiko Asami, sensitively portrayed by Kazumi Aihara. She is a nurse in one of the hospitals and although her safety is at risk, agrees to secretly help them tell the truth about all the deaths. As time goes by, Koyo Ninomiya, a nine-year-old boy played by a female (Miho Ando) contracts AIDS and thinking that his illness is a death sentence, he just wants an apology from the government for what it did to him. The performance of this young woman as an AIDS victim is quite stirring.* After years of stonewalling by Dr. Kazama, head of the Ministry of Health, played by a fascinating Toshi Toda, he finally humbles himself and gives the young man the apology he has been seeking.

Lest you think this is a “heavy” play, the creative staging by Ackerman results in an entertaining interpretation of a difficult subject. For example, in between the straight serious narrative, there are superb production numbers, incorporating various styles of theatre, which are perfectly executed by this gifted ensemble. There are musical jokes with some lyrics spoken in rhyme. The director’s comprehensive understanding of theatricality equipped him to incorporate different genres from Rap and Kabuki, to the frenetic movements of the Keystone Cops, the Marx Brothers, and moments straight out of Gilbert & Sullivan. In the hands of a less skilled director, it could have resulted in a series of disconnected scenes, but instead, the variety of styles seamlessly blend between harsh reality and satire.

The rest of this amazing ensemble includes Mika Santoh, who, wearing a traditional kimono, plays the devoted, caring wife of Dr. Kazama. Other members, each of who play multiple roles, including the zany singing and dancing ministers, are Michael Joseph, Anthony Gros, Takaaki Hirakawa, Andrew Nakajima, and Daryl L. Padilla whose rubber facial expressions are most amusing. Some of the songs performed by the ensemble include, “Japan/America,” “We Ain’t Got AIDS in Japan,” “We’re the Ministers of Nippon,” and “Caught With Fingers in the Jar.”

In keeping with his vision and staying within a very limited budget, Ackerman’s technical team, working within the confines of a small space, put together more than adequate visual elements. Three red screens are moved around the stage to create a different location and also service the haunting projection design by Hana S. Kim, including some powerful special effects. Wendell C. Carmichael clothed some of the actors in fabulous authentic Kabuki costumes, while Donny Jackson blanketed the stage with glorious colors. Special kudos to design consultant Dona Granata and vocal coach Bob Garrett, whose musical work with the actors achieved a highly professional performance.

This profound subject matter in the hands of a less skilled director and ensemble could be in danger of becoming diatribe, which is not theatrically interesting. Instead, Ackerman and his company have created an evening of unforgettable theatre and in my opinion, this production should be Broadway bound.

*This character is based on a real person who actually survived AIDS and is now a minister in the Japanese Parliament.