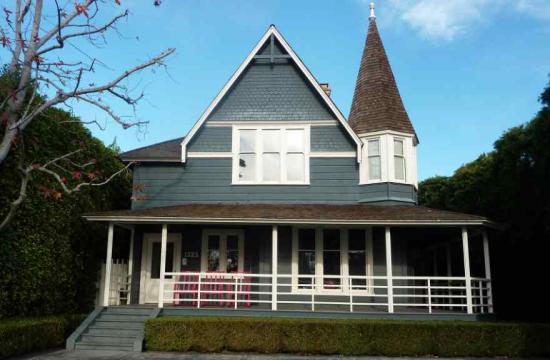 The Conservancy is pleased to offer a rare opportunity to tour the home of tennis star Gussie Moran at 1323 Ocean Avenue in Santa Monica, Saturday April 2, 11am-2pm.

The house, now adaptively reused as a commercial office space, is Santa Monica’s best example of a Queen Anne Victorian, typical of the first residences along Ocean Avenue. It is preserved as a Santa Monica City Landmark.

Gussie Moran was born in Santa Monica, where her family had owned this home since the 1890s. She took up tennis early, won several single and doubles championships and by 1949 was playing on the Centre Court at Wimbledon. In this respect Moran carried on a proud Santa Monica tradition— the city was a renowned tennis capital in the late nineteenth and early twentieth centuries and produced many extraordinary players, among them several national champions.

Moran’s fame, however, was for more than just great tennis. At Wimbledon she created a scandal by wearing a shockingly short skirt and matching lace panties visible below the hem. Officials demanded her expulsion from the tournament (relenting later as attendance soared) while photographers scrambled for the best shots of her risqué attire.

The tours will be offered every 20 minutes from 11 am to 2 pm. Tickets are $15 for Conservancy members and $20 for the general public. Reserve your tickets and select a tour time here.

Attendees will also receive a copy of Discover Palisades Park, its secrets and stories revealed, a Conservancy publication which provides a history of the park and descriptions of 24 points of interest along its 1.6 mile extent from Adelaide Drive to Colorado Avenue.

About the Dudley Cup: The tour is being presented in conjunction with the 100th Anniversary of the Dudley Cup, a youth tournament organized by Mayor Thomas Dudley in 1916. Over the years it has attracted many junior players who went on to fame as professionals, including Dodo Cheney, Gussie Moran, Jack Kramer, Billie Jean King and Tracy Austin.

Over 300 young players are expected to compete in the tournament, which will take place over two weekends beginning on March 26 at Reed Park, the Ocean View courts, Santa Monica High School and the Riviera Tennis Club. Bill Nissley, Tournament Director for over 40 years, will be honored at a presentation at Reed Park at 9:00 am on Saturday, April 2.