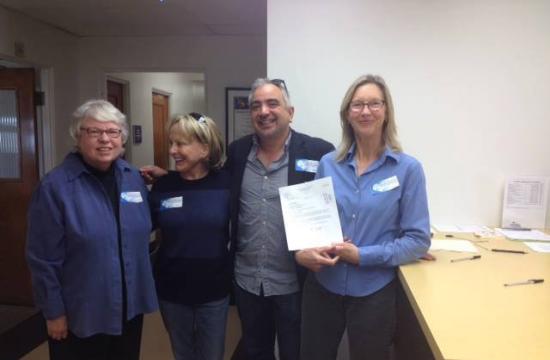 With General Municipal Elections scheduled for November 8 this year, initiatives for ballot measures are hitting Santa Monica streets calling for petition signatures. As each initiative comes to light The Mirror will present the same five questions to initiative filers in an effort to maintain impartiality. Councilmember comments will follow.

1. What problem does the initiative seek to solve?

Too much development and traffic has been the number one issue for voters in the last several elections in Santa Monica. During election years, our elected officials campaign and promise to address resident concerns. Yet after being elected, they support policies of increased growth and densification in our already built-out city of eight square miles. They approve nearly every development project which comes before them and they advance land use policies such as the 2015 adopted Zoning Ordinance which incentivize massive new development projects and the destruction of existing Santa Monica.

The concerns of the residents of Santa Monica go ignored by our City Hall and the developer interests are advanced time and time again. The democratic process is broken, and our elected officials do not seem to represent the will of the people when it comes to development issues.

2. How will it solve the problem?

The LUVE initiative will empower voters to have the final say as to how much development is right for Santa Monica. We can no longer rely on our City Council’s promises to protect our beach town and our quality of lives when it comes to the overdevelopment of Santa Monica. Residents’ concerns matter and residents should not be ignored by our elected officials.

3. If passed, how will the initiative work in real terms?

The LUVE Initiative will ensure that larger developments actually add value to our community; that they are wanted by the community and that they belong in the community. It will empower voters and remove the influence that special interests currently have in the process of negotiating back room deals. It will substantially reduce the number of developments as developers will need to obtain voter approvals and provide real benefits.

4. What should residents consider when deciding to sign the petition?

Is Santa Monica already built-out? Do we need larger, taller, denser developments? Do we already have enough traffic? Has our City Council properly addressed your concerns as a resident when it comes to the overdevelopment of Santa Monica? Is it time that residents have a say as to how much development is right for Santa Monica? Are you sick of empty campaign promises from elected officials who just don’t care?

5. Why did you feel the need to go to the lengths of creating an initiative?

When government fails it becomes time for residents to act. The initiative is our constitutional right granted by the State of California to allow residents to create law. It is required when special interests control our elected officials and our elected officials in turn ignore residents. It is a checks and balances in our democratic process. It is the only thing that will stop the overdevelopment of Santa Monica and protect our quality of lives.

All Santa Monica City Councilmembers were contacted for their opinion. All responding councilmembers have been included:

Eight years ago I supported a voter initiative to control commercial growth, which is still a concern. While that previous measure would have established an annual cap, allowing Santa Monica to pick only the best projects, what is currently proposed dissuades all kinds of moderate-sized projects, including housing. Residocracy’s initiative also appears to give developers the ability to initiate special elections, where they can pour unlimited corporate financing into local low-turnout balloting. We need housing, and we don’t need more developer influence on our politics

I appreciate and understand the sentiments behind the LUVE initiative, as there’s been a lot of change in Santa Monica in recent years which has been challenging for many of our residents. However, I believe the measure goes too far by requiring voter approval of projects over two stories. If the initiative passed, I believe more modestly scaled housing projects would disappear as no housing provider would want to invest in land, design and entitlements when there would be a risk of being denied at the ballot box. On the other hand, well-capitalized developers of the very large proposed projects which concern so many in our town would be willing to spend a lot on a campaign for approval and to take their chances with the voters . So paradoxically LUVE might stop smaller projects while keeping the bigger ones in the pipeline.

The LUCE, Land Use and Circulation Element, was done through an open and transparent process that everyone could participate in and was conducted in public.  The LUVE initiative was developed behind closed doors without any public input or process. It runs 52 pages long and includes specific properties but never sought any input from community members or property owners.

For information about filing an initiative go to: smvote.org and click on Initiative Process.