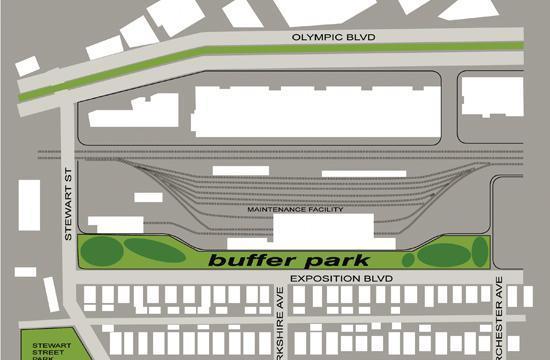 I hope you consider the Issue about naming Buffer Park as news worthy as I do.

The Recreation and Parks Commission met Thursday March 18.  Agenda Item B: Commission discussion and development of recommendations for transmittal to City Council regarding a permanent name for the park currently known as Buffer Park and the possible renaming of Stewart Park. The City Council had previously reached a compromise to name Buffer Park Ishihara Park and suggested to rename the Stewart Park after WWll veteran Private Gandara.   As there needed to be more public input before renaming Stewart Park the issue was referred again to the Recreation and Park Commission.   Thursday night the Commission reframed from renaming Stewart Park as it defined its location. and voted to send the recommendation to name Buffer Park Gandara Park.  There was no opposition from the public to rename the Stewart Park.

The issue about Buffer Park has been going on for years.  It was the residents close to Buffer Park and the Pico Neighborhood Association who fought for that park.  In placing the Maintenance Yard with its operation 24/7 and 365 plus days a year in our neighborhood the City assured us of respecting our wishes and considerations regarding the Buffer Park.  The park is located in an area with the highest concentration of Japanese American residents.  As there is no recognition for the Japanese American residents who contributed to the wealth of Santa Monica for over one hundred years anywhere in Santa Monica I suggested the name of a former resident and neighbor George Ishihara for Buffer Park.  In a survey by the city about names for Buffer Park Ishihara got six votes and there were six other votes for Japanese Culture related names.  Gandara had not been on the list but was suggested by former Council Member Holbrook and Recreation and Park Commissioner Phil Brooks at a former Commission meeting about naming Buffer Park.

George Ishihara was born on February 22, 1921 and died at his home in Santa Monica on March 17, 2009. Mr. Ishihara was a Japanese-American who grew up in Washington and Northern California, and relocated to Santa Monica’s Pico Neighborhood in 1958, where he raised two children. He enlisted in the United States Army and served in World War II in the most decorated unit, the 442nd Regimental Combat Team, and also was part of the 522nd Field Artillery Battalion that liberated the Jewish people from the Dachau Germany Internment Camp and other surrounding camps. During World War II, Mr. Ishihara’s family was interned in two relocation camps. Given his enlistment in the US Army, he was able to negotiate his family being reunited in the Minidoka Relocation Camp.  It took courage to fight for a country and people who looked down upon Japanese Americans even when they were honorable citizens.  The USA Government recently apologized to the Japanese citizens who often lost their livelihood, houses and possessions.  Mr. Ishihara’s daughter currently lives in the Neighborhood with her family.  The Japanese-American people played a significant role in the history of West Los Angeles and in Santa Monica, first as fisher men, then as farmers and gardeners, business and restaurant owners, and lastly as homeowners in the area. Many were displaced from the neighborhood when Interstate 10 was constructed.  Mr. Ishihara worked at Donald Douglas and in his later years he was a gardener around Santa Monica and it is very fitting to name a neighborhood park after him.  He was a member of the Santa Monica Gardeners Association. He lived three houses to the East of me on Delaware Ave. about one block away from Buffer Park. He was well liked and highly regarded in our neighborhood and in the Japanese Community where he served as docent for the Japanese American Museum.  He bred turtles and would give little turtles to his Japanese neighbors.  His oldest turtle George still enjoys life in a Japanese Families’ Garden across from Buffer Park.

I hope you agree with me that the Santa Monica readers of your paper should be told about the controversy regarding the naming of Buffer Park.  The Recreation and Park Commission totally disregarded the wishes of the concerned community.  I do not object of having Stewart Park renamed after Private Gandara.  He also deserves to be recognized.  His name is included in the Santa Monica Veteran Memorial.

With best regards to you, and hoping to read a report of Buffer Park Naming in your paper.