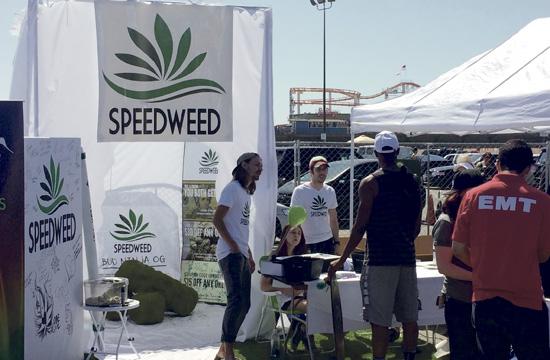 Celebrating all things 420-aligned, the 420 Games hit Santa Monica Saturday, attracting a wide range of participants from near and far.

The Games were established to show that cannabis users are not lazy, unmotivated or “stoners” and to de-stigmatize the millions who use cannabis in a healthy and responsible lifestyle, organizers explained.

“Cannabis is a beautiful gift that God gave to us, it’s not a drug,” said Jim McAlpine on stage at the event. Held Saturday at the Santa Monica Pier, the 420 Games – Los Angeles edition – combined educational outlets and athletic activities in an effort to help remove the stigma of laziness and uselessness from responsible marijuana users.

Founded by McAlpine, the series of 420 Games’ events across the country all feature a 4.2 mile route that participants walk, jog, bike or skate while wearing green badges numbered “420” resembling those found on marathon runners.

In Santa Monica, hundreds of participants gathered at the Pier at 9:30am, traversing a track down to Venice beach and back up for speeches, food trucks and beer tastings.

While comedians performed and the event ended with a concert by Reggae artist Pato Banton, education and activism seemed to be the order of the day.

“We will keep running until the last cannabis prisoner walks out of their cell,” declared noted cannabis activist Steve DeAngelo.

Tracy Ryan, founder of CannaKids, recounted marijuana’s role in helping her daughter beat cancer. The speakers each pushed for support on various legalization laws, including California’s Adult Use of Marijuana Act.

This aligned well, all in all, with the Games’ mission statement: “The 420 Games does not advocate that everyone should use cannabis…We strive to teach those who have been misled about cannabis in a positive and respectful manner so people can make educated decisions about the use of cannabis.”

Santa Monica hosted the first of six games that will take place across four states this year, including Oregon, Washington and Colorado.