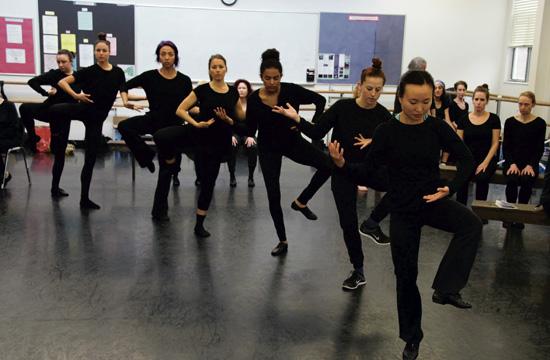 The paintings that cover the walls at the Arena 1 gallery in Santa Monica Airport each show faded groups of four unsteady vertical lines with one across, evoking the ways our ancestors might have marked the passing of time. It is just this sort of continuity that local artist Doni Silver Simons and choreographer Donna Sternberg hoped to summon in a collaboration performance piece held early April titled “49 Days: Women Who Count.”

During the performance, between the cave markings, 39 performers from Sternberg’s dance company stand, sit and weave between benches to show the ways that women as bringers of life have also been “keepers of time.” A chorus of women counting through a 49 channel soundscape created by Silver Simons informs the piece’s movements.

“When we decided to do this and the larger topic was time, memory, counting, women are often keepers of time in different cultures,” said Sternberg. “They mark the time with birthdays, anniversaries, certain calendar celebrations an often it’s women who are the repository of that kind of memory and counting. So from the original concept this evolved into something that was about women as the keeper of time and memories in a broader, general sense of society.”

“[The piece] is really about not just the audible voice of women but the physical voice of women,” added Silver Simons. “In the recording, I specifically chose women who had done significant work in the world, who had chosen large scale life plans because I wanted it to be a feminist piece about women who counted.”

Both women have been working artists for more than 30 years. Silver Simons had been working on the audio and visual components of the piece for years (and developing its themes in other work for even longer) when she met Sternberg at a panel discussion by recipients of art fellowships from the City of Santa Monica. Sternberg – always open to collaboration given that her dance company focuses on collaborating with scientists, philosophers and artists from other mediums – listened to Silver Simon’s voice installation and saw the movements begin to shape themselves in her mind. They received a grant from the city of Santa Monica – specifically the Community Access & Participation Grant which supports nonprofit arts organizations like Sternberg’s company – and the rest is history.

The completion and success of the piece, both artists agree, highlights the importance of cities continuing to support and patronize the arts.

“Santa Monica is extraordinarily generous in its attitude towards the arts and its funding of the arts and we’re very appreciative,” said Silver Simons.

“It’s these kinds of grants [like the CAP Grant],” Sternberg elaborated, “That enable, particularly dancers, to put on public performances and because of the fellowships that Doni and I received from the city, we were allowed to do our own individual work…then we were also able to join forces. So a city that creates a collegial atmosphere for artists to get together and work together is a city where artists can actually exist and thrive in.”

For more information on the dance company head to dsdancers.com. For more on the artist head to donisilversimons.com