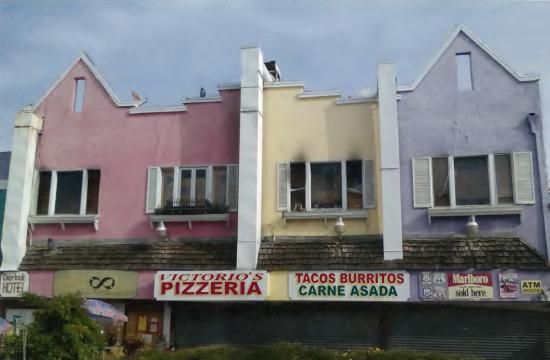 A Santa Monica landlord is facing allegations of using fire to illegally evict rent-controlled tenants after flames ripped through an Ocean Front Walk building late last year, with low-income residents claiming they were literally left out in the cold with nowhere to sleep.

The lawsuit comes on the back of Santa Monica City’s announcement of a Fair Housing Month campaign for the month of April, to “improve community awareness of the fair housing laws and to help eliminate housing discrimination in the City.”

The lawsuit was filed Wednesday, April 13, in Los Angeles Superior Court by the Legal Aid Foundation of Los Angeles (LAFLA) and The Scali Law Firm, on behalf of nine of the displaced residents

The suit is against Russell No. 8 Santa Monica Properties, LLC, and the company’s officers: Martin Mink, Florette Mink, Terry Mink and Rebecca Rakes. Attorneys are asking that the tenants be allowed to return to their homes, and that the plaintiffs be paid their temporary housing allowances, as is required by Santa Monica law, LAFLA said.

According to the lawsuit, the owners have refused to temporarily relocate tenants and instead, “have focused on turning this tragedy into an opportunity to profit by removing these rent-controlled units from the rental market and prematurely terminating the Plaintiffs’ tenancies without ‘just cause.’”

The incident occurred on December 12, 2015, with the Santa Monica Fire Department (SMFD) responding to a blaze at 1605 Ocean Front Walk at 7:45pm. It took approximately 40 minutes to get the fire under control with the incident lasting another three hours while engine companies performed overhaul and mop-up to fully extinguish the fire, according to the SMFD.

“20 residents were displaced by the fire and three were taken to the local hospital for smoke inhalation,” SMFD stated. “The Red Cross responded, and is assisting the displaced residents with temporary shelter,” SMFD said in their incident report.

Notices were plastered on the building asking residents to retrieve all of their belongings with an escort by December 23, 2015, and to sign a liability release form for insurance purposes.

Attorneys are calling for “damages be paid related to the emotional distress the tenants have experienced throughout this ordeal due to the owners’ callous treatment of their extremely vulnerable tenants,” LAFLA said.

Plaintiffs allege that the fire was substantially caused by the landlords’ negligent maintenance of the premises, failing to make necessary repairs and comply with local and state law.

“The owners refused to fix the in-wall heaters, forcing many of the elderly and disabled residents to use space heaters in order to keep warm. Smoke detectors, fire alarms and fire extinguishers that could have minimized the harm were also not working properly,” LAFLA referenced.

Since December, the owners have engaged in a campaign of harassment ranging from falsely informing the tenants that the fire terminated their tenancies and that the City required them to remove their belongings from their apartments to refusing to repair the building — all in an effort to get the tenants to permanently abandon their homes, according to LAFLA.

“The harassment of the Ocean Front Walk
tenants exemplifies the problems faced by many other low-income and rent-controlled tenants in Santa Monica and throughout the Los Angeles metropolitan area. Those problems stem from an increasingly unaffordable housing market,” the foundation said.