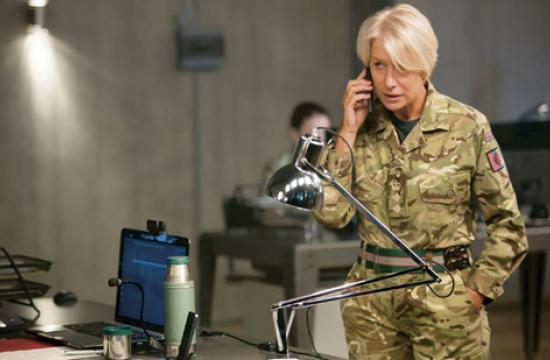 “Eye in the Sky” is a tense political thriller offering a balanced viewpoint in the rules of engagement.

Colonel Katherine Powell (Helen Mirren) leads a military operation in England and takes her orders from Lt. General Frank Benson (Alan Rickman, in his last role). Also involved is Steve Watts (Aaron Paul), a drone pilot stationed in the United States. The mission is at first to capture some terrorists who have gathered at a house in Kenya. Things change, though, when one of them puts on a suicide vest.

Early on, Colonel Powell is adamant about making this a kill mission. She even tries to get the collateral damage risk analyst to downgrade the likelihood of casualties. Meanwhile, Lt. General Benson, along with members of the UK government (in a separate location from Colonel Powell), are a lot more cautious about what path to take.

Complicating matters is the presence of a little girl near the house where the terrorists are gathering. While it seems very likely that if the terrorists leave the house, they will blow up an area with a lot of people, someone from the UK government points out that with the drone strike, the girl stands a good chance of not making it.

The team is aided by undercover Kenyan field agents, including Jama Farah (Barkhad Abdi from “Captain Phillips”), who use video bugs to spy on the suspecting terrorists.

There is a lot of back-and-forth speculating and debating and having to go to higher-ups to get approval. Some of this comes across in a darkly comedic way insofar as it would take this much effort to get approval on a very time-sensitive situation.

Watts’ character, along with his female drone partner, are both quite troubled by the power that they have in this operation and the damage that they could do.

Farah’s cover is almost blown when a boy asks him what game he is playing, as the device Farah is operating looks like it could be a game. What he decides to do is have the boy sell some of his (Farah’s) buckets and tell him that he can keep all the money that he makes from them.

The movie gives a glimpse into what could take very well take place between military and government officials.

The direction of the picture, along with the editing, is strong and effective and makes you feel in a sense as though you are watching events unfold in real time with immediacy to the proceedings.

While certainly topical, the movie will engage you on an intellectual level.