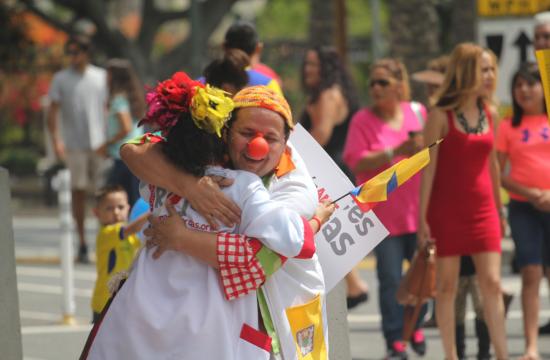 The “Hug Me” humanitarian campaign of hug therapy will be officially launched at the 2016 celebration of World Laughter Day on Sunday May 1st at Ocean Park Beach, 2600 Barnard Way, Santa Monica,from 1pm until 3pm.

Everybody knows that laughing and hugging feel good, but few realize how valuable these simple tools can be in improving our every day wellness and wellbeing.

Laughter cannot heal or solve anything, but it can help to heal and dissolve everything. In such a gloomy economic climate we need to lighten up more than ever. Laughter is a positive and powerful emotion that has all the ingredients required for individuals to change themselves and to change the world in a peaceful and positive way.

The Hug Me humanitarian campaign was created in Ecuador in 2011 by Raquel Gendry, president of “Narices Rojas”, a non-profit organization of medical clowns who work in hospitals and with the poor since 2006. Now based in the USA, Raquel Gendry wanted to bring to Los Angeles this campaign which has been very successful in her country.

World Laughter Day is a free event that has been celebrated in Los Angeles on the first Sunday of May since 2005 at the initiative of Sebastien Gendry, creator of the Laughter Wellness method.

It was first started in India in 1998 and now takes place in all the major capitals of the world and more cities. Its aim is to promote intentional laughter and its many healing benefits, and raise awareness about the many thousands of community laughter clubs around the world. (Several are in the Los Angeles area.)

More information and directions to this event are at www.WorldLaughterDay.com Learn more about intentional laughter at www.LaughterWellness.org