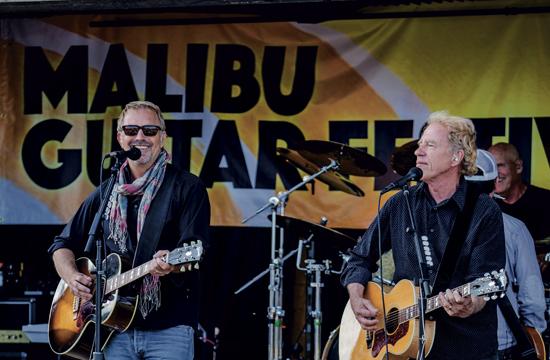 The Malibu Guitar Festival is gearing up to be one of the Westside’s top music events of the year, with a stellar line-up of nationally recognized artists announced.

Event proceeds benefit Mending Kids, the Boys & Girls Club of Malibu, among others.

The four-day event launches with an opening night fundraiser on April 28; Festival kick-off on April 29; Festival Day on April 30, and closes with a special Guitar Brunch featuring a “Beatles Gear” Presentation, Art Exhibit And Live Performances, May 1.

The duo saw an opportunity to bring the community together, by securing globally renowned, award-winning musicians to perform, while also supporting local musicians and giving back to charity, organizers said.

“The iconography of the guitar and the backdrop of Malibu are a perfect combination for this beautiful event inspired by a passion for music and a love of community,” said DeLuca. “The artists and supporters that have come together will insure the event’s success and growth well into the future.”

Two decades into his recording career, Kenny Wayne Shepherd continues to create genre-defining blues-infused rock n’ roll. He has built an enviable resume as an accomplished recording artist, a riveting live performer, and is one of the most talented and distinctive guitarists of his generation. Shepherd has sold millions of albums worldwide, received five Grammy nominations and two Billboard Music Awards

Grammy-nominated pedal steel guitar virtuoso Robert Randolph’s unprecedented musical prowess earned him a spot on Rolling Stone’s “100 Greatest Guitarists of All Time,” and attracted the attention of Eric Clapton and Carlos Santana, who have collaborated with him on stage and in the studio.

The Empty Hearts is a super group featuring members of Blondie, The Cars, Chesterfield Kings and The Romantics, whose name was christened by Little Steven Van Zant. Rock and Roll Hall of Fame drummer Clem Burke, two-time GRAMMY nominee and MTV Video of the Year Award-winning guitarist Elliot Easton, bassist Andy Babiuk and lead singer/rhythm guitarist Wally Palmer, have parlayed a combined lifetime in rock into their self-titled 429 Records debut.

The musician/celebrity’s career trajectory has taken off at an astounding pace, establishing Simpson as one of the most marketable youth brands in music. From uploading videos on YouTube from his native Australia, to selling out tours worldwide, his name has become a household staple in the youth market.

Dale Watson is an acclaimed singer/songwriter/guitarist and self-published author who champions “Ameripolitan” (honkytonk, rockabilly, western swing and outlaw music) as a new genre. The tattooed, stubbornly independent outsider, who is an old school country & western maverick, is blessed with a strong and steady baritone reminiscent of George Jones, Johnny Cash and Merle Haggard.

Recently hailed by two-time Rock & Roll Hall of Fame inductee David Crosby as “one of the best young singer-songwriters in America – maybe even the world,” the nationally touring, independent artist Marcus Eaton has amassed an extensive catalog of original material.

Mike Hayes is a blues-rock virtuoso who demonstrates inimitable guitar mastery, augmented by a gravelly, lusty voice that oozes with charisma and effortlessness soul. His live show ceaselessly captivates the listener, blending the most deliberate and precise technical skills with the fervent energy of a young Iggy Pop.

Highly versatile female rock quartet who dares to channel the almighty Led Zeppelin through their very own improvised magic. Zepparella blends a diverse array of influences ranging from speed metal to classical to jazz, R&B and rock, in honoring the legacy of a sacred band.