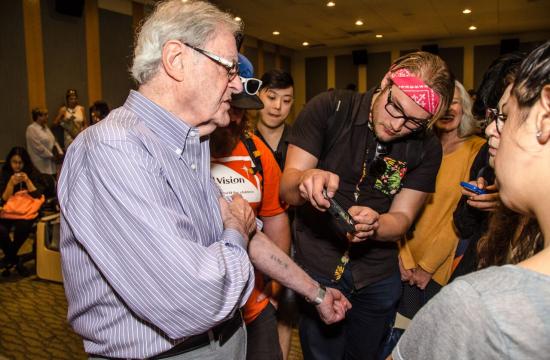 Holocaust Survivor Dr. Henry Oster gave a talk titled, “Even in Hell, There is Hope” at Santa Monica College on Tuesday, April 5.

During the Holocaust, Dr. Oster was in the Lodz Ghetto, the Auschwitz-Birkenau Death camp, and Buchenwald, another concentration camp.

In his speech, Dr. Oster shared his experiences during the Holocaust and the importance of maintaining hope under the direst of circumstances.

Afterwards, Dr. Oster talked with students and showed them the tattoo he received on his forearm for identification while he was at Auschwitz. Dr. Oster mentioned to the students that his car’s license plate bears the same number.

Dr. Oster’s personal story inspired the “Freedom” Memorial Sculpture by renowned sculptor and multimedia artist Toni Scott, which can be found at the Museum of Tolerance in Los Angeles.