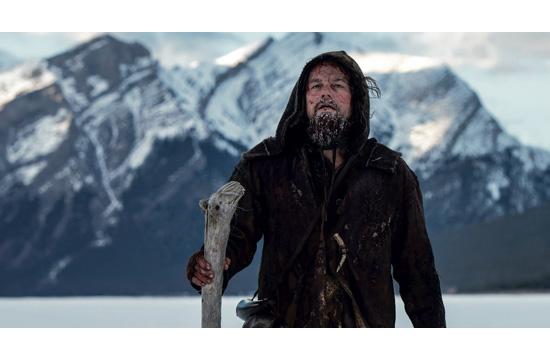 Glass is the guide for a fur hunting expedition when one day he is savagely attacked by a bear and is left in horrendous shape. After his fellow frontiersmen carry him around on a makeshift stretcher and realize his status is weighing them down, it is decided that Fitzgerald, Bridger, along with Glass’ half-native son Hawk will separate from the group and tend to him on their own. After Glass’ condition seemingly deteriorates, they decide to abandon Glass in the wilderness, thinking he has little chance of survival. Before this takes place, though, Glass witnesses Fitzgerald kill Hawk

Getting revenge on Fitzgerald is what Glass is after once he has gotten some of his strength back and has recovered somewhat.

In a very demanding physical role, DiCaprio is excellent, conveying a lot with minimal dialogue. This is probably the most difficult part DiCaprio has ever had. Further demonstrating his versatility, Hardy is very good in a menacing role, with hardly any sympathy to his character. The real breakout performance, though, was probably that of Poulter who seems to come-of-age during the film. A young man who clearly does not like what he sees in Fitzgerald, he is the real moral center of the picture.

What the crew of the movie was able to do on a technical level is astonishing. The editing, sound work, and look of the movie are all first-rate and really immerse you in the atmosphere.

The picture takes place in the middle of winter, and the fur hunters are in freezing/snowy conditions. Such conditions add to the extremity of the situation, and also shows why trying to tend to Glass was a liability to the group, so they all would not die. Situational ethics comes into play here when trying to decide what to do with Glass.

It was not believable for me that DiCaprio’s character would have been able to survive all that he endures. Also, why would an experienced frontiersman like Glass go out wandering alone and not stay with the group – this is what leads to his bear attack?

This very well-made film, while not for the overly sensitive, is worth enduring to see DiCaprio at the top of his game. The gorgeous outdoor settings are a must for a truly breathtaking big screen experience.