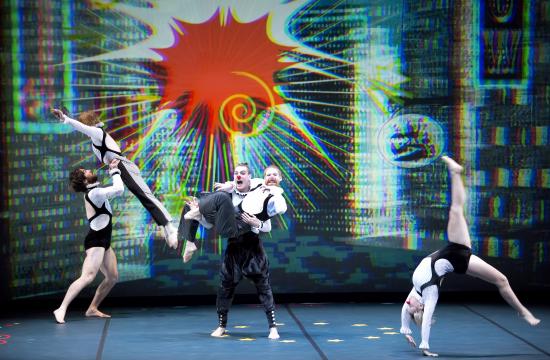 The highly-acclaimed “Carnival of the Animals” by Circa, is hitting the Broad Stage next week, promising to fill the boards with magic and artistry.

Circa is an internationally renowned contemporary circus company from Brisbane, Australia.  A blend of circus, multimedia and music, “Carnival of the Animals” is a magical reinvention of the classic music suite by French romantic composer Camille Saint-Saëns.

Written in 1886, “Carnival of the Animals” has been adored by children and adults for many generations. It is a playful and magical work of music imbued with Victorian eccentricity whose fourteen movements each explore a specific or group of animals, organizers said.

For this production Australian composer Quincy Grant reworked and extended the original suites. On stage Circa performers are accompanied by and interact with sumptuously-detailed animation created by UK-based Australian video designer Michaela French.

“An acrobatic wonder of bodies, light, and sound, Australia’s award-winning Circa brings us ‘a spellbinding and mesmerizing performance,’ said Brisbane Kids, Australia.

Check out the video here

“It is about wild imagination, explosions of magic and comical humor, that speaks to everyone, especially children… a spectacle not to be missed." InDaily Australia said, “Is there a more joyous sound than a roomful of children laughing and squealing with delight?”

The initial ideas for “Carnival of the Animals” came out of a weeklong development process with Director Yaron Lifschitz and Associate Director and Costume Designer Libby McDonnell in Berlin in Dec 2013. Michaela French, Video Designer, explained: “I wanted to re-create the feeling I had as a child when I’d read a book and there was the sense that it might just be possible to slip into that imagined world and discover that it was real almost as though one slipped into an alternate reality where elephants can dance, frogs ride unicycles, gravity is defied, where the magic of the circus is the most important part of life and the entire world can be carried in a small suitcase.”

Depicting creatures from land, sea and sky, Circa’s performers take children and their adults on a safari through the lives of the tortoise, the elephant, the kangaroo, the swan, the life aquatic and many other beasts of fur, feathers and fin. It’s an exuberant celebration of all of earth’s creatures and the power of our bodies to express who we really are.

Created by artistic director Yaron Lifschitz, and the Circa ensemble, “Carnival of the Animals” promises to brings the joy of the animal kingdom to the stage in a sophisticated and visually stunning physical theatre extravaganza for children big and small.

Circa is known for pushing artistic boundaries and creating powerful works of circus art that thrill, challenge and captivate as they constantly reimagine circus as an art form.

“Carnival of the Animals” performs for four performances only April 28 through April 30.