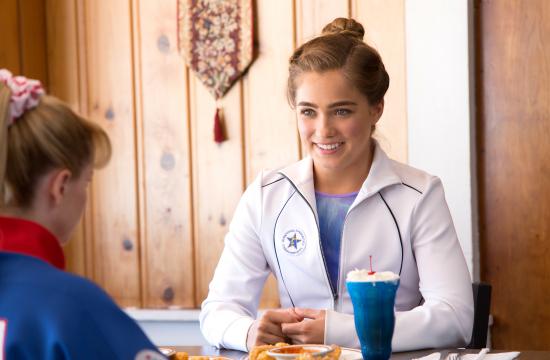 Melissa Rauch is an east coast native who began her career doing stand-up.  She did a one-woman show playing Jenna Bush in “The Education of Jenna Bush” and later segued into television where she had a recurring role on “The Big Bang Theory” as well as guest appearances on “The Housewives of Orlando” and “True Blood.”

Her latest film is “The Bronze,” written by Melissa and her husband Winston Rauch.  The story revolves around a former Olympic gymnast who competed with a ruptured Achilles heel, winning a Bronze medal for the U.S. Olympic Gymnastic team, and her subsequent unfulfilling life.

Haley Lu Richardson, who plays the fledgling gymnast, began her career as a dancer. Subsequently, she made guest appearance on several television programs including the long-running series – “Law & Order.” The rest of the cast includes Gary Cole, Thomas Middleditch, Sebastian Stan, and Cecily Strong.

Rauch and Richardson recently sat down with a select group of journalists to discuss their latest film and the following has been edited for content and continuity for print purposes.

Do you feel by writing this with your husband that it was a way of taking charge of your career?

Melissa:  I love writing so there’s writing for the love of writing and getting the story out there. When Winston and I are writing, we have our writing hats on.  I like taking control and not waiting on the industry.  I’m not getting the roles in films that I want.  I think writing is a great way to write yourself out of the box. There were people interested in the script but wanted to cast someone else in the role of Hope.  So, we held onto it and decided to do it ourselves on a shoestring budget.  Ownership was important to us.

It took a while to get the movie out there.  How did it finally happen?

Melissa:  We screened at Sundance and eventually Sony Pictures Classics pick up the distribution rights.

What we see onscreen is a foul-mouthed, spoiled, very unlikeable brat.  As the actress/writer, how would you describe Hope?

Melissa:  Playing her made me realize that she’s all talk on the outside and that under layers and layers of muck is her sweetness, but you have to chip away at it.  She’s just doesn’t like herself very much. We could have made her a bit more likeable but decided not to.

Besides the USA Team warm-up suit, how important were her bangs to the character?

Melissa: She had those bangs way past the time it was socially acceptable and those bangs are where she holds her pride.  She doesn’t really know how to properly express herself, so she plays with her bangs.

How did your audition go?

Haley: I was 40 minutes late and literally called my agent afterwards.  I told him that if these people call you and tell you to drop me as a client, I would completely understand.  I really screwed up.

Melissa:  Haley taught me so much about acting that day.  She has this monologue at the end of the movie.  She started and then stopped saying she was sorry.

Haley:  I skipped over my lines and didn’t know what I was saying, so I had to stop.

Melissa:  When she finally did it, it was perfect and when she left the room, we all said, “That’s our Maggie.”

Did you base your character on someone and how did you train for your gymnastic scenes?

Haley:  I’m obsessed with Shawn Johnson.* I’ve always been obsessed with gymnastics.  It’s my favorite sport in the Olympics.  I watched a bunch of videos but as far as the physicality, I worked with a trainer and trained for a month getting the body, the stance, and the hand movements.  I’m a dancer and something that I really didn’t know until I was working with my trainer is that the form is very different.  Gymnasts are very strong and tight and compact while dancers are long and fluid.  It was really hard for me not to have ballet arms while I was running and doing cartwheels.

Melissa: Her hands literally ripped open from hanging on the bars.

Haley:  The rite of passage for gymnasts.

Hope does a lot of nasty things to Maggie.  As the character, did she ever suspect her motives?

Haley:  Maggie considered everything Hope said as gold coming out of her mouth.

What was it like having to eat all that junk food?

Melissa:  It was sitting around and eating cold French fries.  Actually, people had set up lawn chairs to watch us.

During the shoot, did you make any script changes?

Melissa: Yes. There were some long days – shooting 14 or 15 hours.  A lot of times we didn’t have money to shoot at certain locations, so we would go home and do a rewrite of a particular scene.  Some of the obstacles you face end up informing your creative decisions.

Do you have a favorite film?

Melissa:  “All About Eve” is my all-time favorite film.  I watched it again recently.  It’s incredible how it still holds up.

What advice would you give to people who want to get into the television or film
business?

Melissa:  If they want to go into the film or TV business, if there’s any part of you that likes to write, you should try to create your own stuff.  Most people in this business love it.  It’s their passion as well as a job. So, there’s a sadness that comes along with it when you’re not given the opportunity to work.

Good luck with your film.