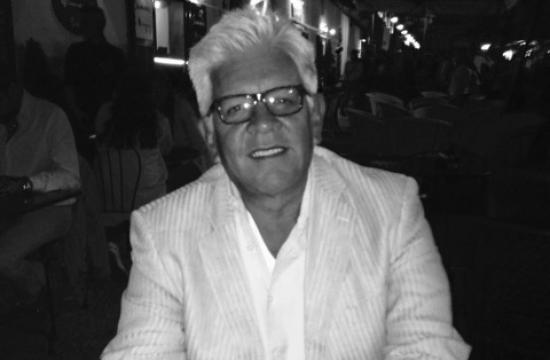 Mr. Goldey collapsed with his wife Karen at his side while attending a reception for the opening of The Factory Contemporary Arts Centre in Ho Chi Minh City, Vietnam.

George had recently started teaching the prestigious Cambridge Language Courses at the University Of Saigon. “He brought his business acumen and communication expertise to a new generation of ambitious and exciting entrepreneurs in Vietnam. However, his real joy came from another position instructing third-graders using current fun music from the United States, resulting in amusing stories on a daily basis,” according to his wife Karen.

“George’s proficiency in so many languages made his love of travel a meaningful, always fun, adventure, especially to the friends he visited and the new ones he made in his travels across 6 of the 7 continents.

Traveling with his family was a real delight in George’s life. Sharing early morning walks in parks across Europe with his daughter was everything to him. George was considered "family" by many across the globe, often a second father to those with whom we shared our home and our lives. His huge hugs and uncanny ability to listen will be missed by many,”Karen said.

Social media tributes from students and colleagues of Mr. Goldey have come from around the world, including France, Germany, Italy, Japan, Austria and Vietnam.

George is a 1976 graduate of the University Of California, Santa Barbara and a 1970 graduate of Clifton High School, Clifton, NJ.

During the latter part of 1980’s Mr. Goldey served as a senior executive with the corporate division of Rogers & Cowan Public Relations in their Los Angeles office. There he served under CEO Richard Taylor, implementing campaigns for a wide variety of high profile clients.

George Goldey is survived by his wife of 32 years Karen and beloved daughter Alexa, as well as many cousins. Memorial services will be held on Saturday, April 23, 2016, 2pm, at St Augustine By The Sea, 1227 Fourth Street, Santa Monica.