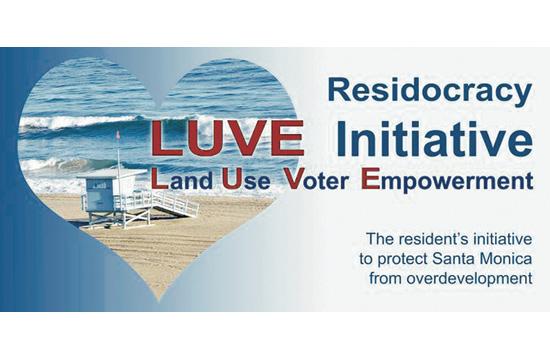 Full Disclosure: I read the Land Use Voter Empowerment or LUVE initiative, currently gathering signatures to get on a ballot, and cannot pretend to have understood each and every aspect described in it. Like a day’s fishing outing, more fish got away than made it into my ‘boat’ of understanding. I’m left playing the role of the high school student who asks with trepidation “Will we be tested on this?” I can at least answer the question “What is Santa Monica’s current development platform?” and it is the Land Use Circulation Element or LUCE… which LUVE would like to alter.

Similar to the arguments that are already fomenting online and otherwise about LUVE, it has a singular outstanding dimension which may be working both for and against the LUVE… something like the catchy ‘hook’ in a popular song. (We’ll get to it in a moment.) But once you have a hold of that ‘sticky’ riff, it is probably true that there exists a general complication with LUVE as described by those opposing it: It does feel “complex.”

Many might say that raising a teenager is “complex” but it still needs to be done. Yet you might describe the process of parenting a teen in more easily understood language than that of the text of the LUVE initiative. Of course, raising a teen does not normally involve various levels of local government, interpretation of existing laws and codes, projected social and environmental impacts – or does it? Now that I think about it, maybe anyone contemplating raising kids should be made to read a document about what’s involved that is at least as complex as the text of the LUVE.

I cited a singular aspect of LUVE and it appears to be this, copied from the online text of the LUVE initiative: “The measure would create a new permitting requirement and process.  A “Major Development Review Permit” would be required for projects exceeding the LUCE’s Tier 1 maximum height (32 feet/two stories) and size limits. The processing for such permits would include review by the Architectural Review Board, which would make recommendations to the Planning Commission. It would, in turn, be required to make certain findings before recommending the project to the City Council. If the Council made specified findings and approved or conditionally approved the project, the permit would not become effective unless and until the voters approved it in a general or special election. Similarly, a new requirement of voter approval would apply to all development agreements. Any development agreement approved by the City Council would not become effective unless and until it was approved by the voters.  The measure states that the developer would pay any special election costs incurred in seeking voter approval of a review permit or development agreement.”

Let’s hope the struggles with or over the LUVE initiative don’t become Shakespearean, but it’s the paragraph above that I believe is causing many to say, “Ay, there’s the rub.”  A group opposed to the LUVE, Santa Monica Forward, thinks the compelling of voting demanded by the LUVE is wrong-headed. In a statement published in the Santa Monica Daily Press, the “Forward” group argues that “sometimes you need a hammer and sometimes you need a wrench, but ballot-box planning is like mandating that all future generations must use only a hammer going forward, no matter what the problem they face.”

However, I take issue with Santa Monica Forward’s implication in that same statement that the LUVE is falsely invoking that the initiative “will protect us from shadowy forces whose only desire is to ruin our way of life.” Money is not a shadowy force; it can be a sledge hammer for those who are hammer fans.  Let me ask “Forward” if our city has a downtown retail area that includes not only a mall but a second multi-story shopping center that has been built not just once but twice since I’ve lived in Santa Monica… because all of that is really great for low income housing and clean air and less traffic?  To borrow from classic radio, “The Shadow knows.”

And this of course is why development and planning are slippery slopes requiring, among other things, complex laws and ordinances and reviews.  Should voters always have the last say in these things?  In each decision that is made concerning a structure over 32 feet in height? There’s something that feels very controlling about that, although the costs and bother involved would definitely slow development in our city.  Still, those with something big to gain might just put up with that. I’d rather they took a look at our LUCE and just took their money and blueprints to another city rather than decide to fight to get on one of our ballots. But that’s hoping that a certain sustained level of frustration will keep developers from overbuilding – and with that bring increased traffic and a lesser our view of the sky – just because getting things done in Santa Monica is difficult. Difficult… hm. Maybe I should take another shot at reading the complex text of the LUVE.