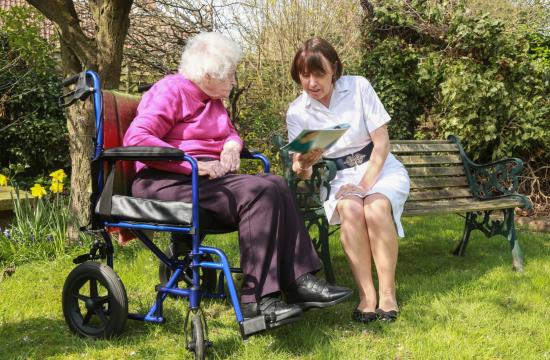 They don’t ask for much – just a good story now and then. Sometimes, a lot of the time, they may not be able to ask, but you can see it in their eyes. Tired eyes that are saying “I can’t make out the words anymore.” Proud eyes that hate to say, “I’ve had a stroke. I can’t hold a book in my hands.” Quiet eyes that are asking, “Could you take a minute and read me a story?”

Usually a love story that might take them back to a time when they were young and in love as only the young can love.

Helen closes her eyes when I read, perhaps to keep me from reading something in them that is for her eyes only. But she cannot hide the smile that dances across her face. She can not hide the way her hands, folded over her chest, sway back and forth to a melody of memories only she can hear.

Rebecca asks me to change the names in every story to Rebecca and Franklin. She does not close her eyes when I read. She stares, beyond the room, beyond the walls, beyond the building – beyond time itself, into a world where a man named Franklin and a woman named Rebecca lived and loved and promised a forever to each other.

John likes me to read to him. Most men don’t but John does. I think it’s because every woman in every story is, in John’s mind, a woman whose heart he once won. He doesn’t say it but … and lost.

I used to wonder if the seniors I read to considered me a time thief, stealing a little of what little they might have left. But no. I have learned that reading to someone is the antidote to loneliness. It is like giving and getting a hug when we need it most.

A good story is a good escape.

A good safe place to hide.

From a step that isn’t quite as strong as it once was, from eyes a little dimmer than just the other day, from a mind not quite as sharp.

A good story can turn today into yesterday, when loneliness was absent, love and respect ever present. A good story is, indeed, a good escape from, as Shakespeare wrote, “second childishness and mere oblivion, sans teeth, sans eyes, sans taste, sans everything.”

My grandmother was considered forever lost to Alzheimer’s. The last time I saw her, her eyes were closed. No, they were crushed shut. Her fists were clenched so tightly around her bible I could almost see the blood draining from her veins and she was tap, tap, tapping her feet, faster and faster until the tapping became an angry stomping. She was digging into her mind, trying to remember someone, something, anyone, anything, but the deeper she dug the further down she fell into the abyss that was once a well of golden memories. Every memory that had been tucked away for safekeeping, every moment of love and hope, every dream, every victory, every loss, every moment worth saving – no longer accessible.

I removed the Bible from her grip then sat on the floor and started reading. Before long her hands relaxed, she stopped stomping her feet and the only sound in the room was the sound of my voice. I read to her for about an hour. Finally, sadly, I kissed her goodbye. My hand was on the doorknob when she called to me.

I turned. Saw the recognition in her eyes.

That was all. As quickly as it had come, the light went from her eyes and she was gone again.

Don’t be afraid to read to someone considered forever lost to Alzheimer’s. You might just find yourself in the middle of a miracle.

In hers, she is somewhere between seven and eight and what somewhere between seven and eight-year-old doesn’t like a bedtime story? Gwenna prefers stories about angels. One night, long after the bedtime story had lulled her to sleep, Gwenna woke, saw me sitting at her bedside, book of stories still on my lap and asked, “Are you my guardian angel?”

Carry a book of stories with you. Read to someone who can no longer read for himself or herself.

A good story will lift your old friends from a life as empty as a weed-ridden patch of dirt into the Garden of Eden.

William McDonald is the author of "Old Friends (Endless Love)" Available at oldfriendsendlesslove.com