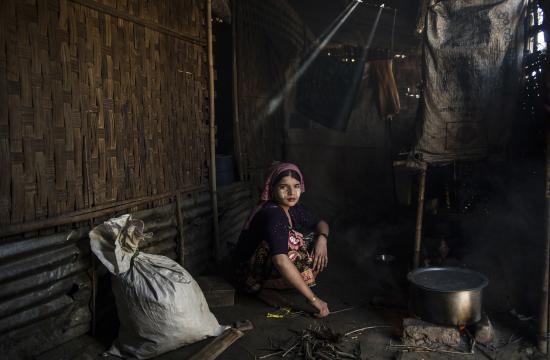 The exhibition will run from April 23 – August 21.

With the number of displaced people having reached some 60 million globally, according to UNHCR, the UN Refugee Agency, this timely exhibition will allow audiences to engage with aspects of the plight of refugees not previously encountered, and to reflect on a full range of current global refugee experiences through singular and compelling images. These images humanize the refugees’ struggles to build new homes and peaceful lives while in flight from dehumanizing and life-threatening persecution and deprivation.

A core principle of Refugee is to present these diverse populations with both dignity and respect, even as they have endured often unwelcoming conditions and hostile environments in order to find their new beginnings.

Of the exhibition and its related collaborative initiatives, Annenberg Foundation Chairman of the Board, President and CEO Wallis Annenberg states: “I’m proud that the Annenberg Foundation has built a strong tradition of exploring our most pressing and complex public issues, of promoting meaningful dialogue even where there is contention and controversy. I can’t think of an issue more important and vital than the global refugee crisis. Now more than ever, we need to go beyond superficial readings of this worldwide concern in order to understand its deeply human ramifications.  In this powerful exhibit, I believe we do.  I believe we go to a place that only great and stirring art can truly go – deep into the humanity of the refugee crisis, as seen through the eyes of some of the greatest photographers alive. These extraordinary and visionary artists don’t advocate, they illuminate; they don’t argue a position, they enlighten. I believe it’s essential viewing, so we don’t just see what’s happening in our world, we feel it.”

“This remarkable initiative is very timely, coming as violence and human rights abuses uproot people around the world at an unprecedented pace,” said UN High Commissioner for Refugees Filippo Grandi. “The photographs in this exhibit portray their courage, resilience and strength. They show that this is not an anonymous movement; these are ordinary people, who have been forced to flee.”

The presentation of Refugee is coordinated by exhibit co-curators Patricia Lanza, Director of Talent and Content of the Annenberg Space for Photography, and Elisabeth Biondi. It will be on view at the Annenberg Space for Photography from April 23 – August 21, 2016, 2000 Avenue of the Stars, Los Angeles. Tel: 213.403.3000, Wednesday through Sunday: 11am – 6pm. Admission is free.