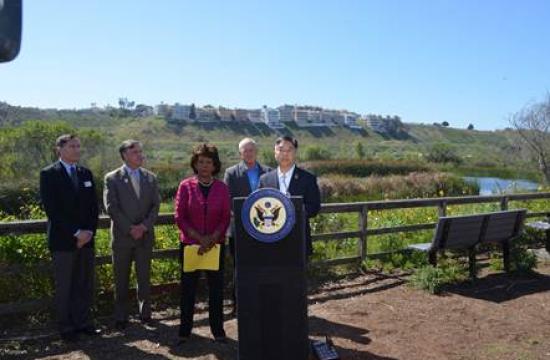 Upon introduction of H.R. 4871, Mr. Lieu released the following statement:

“Whether it is conserving the Ballona Wetlands, preserving our beaches or creating more opportunities for recreation in our urban areas like the Baldwin Hills and San Pedro, this bill is a first step toward making more federal resources available for our trails, beaches and open space.  Expanding the Santa Monica National Recreation Area would make more scientific and infrastructure funds available thereby addressing a shortage of resources to preserve open space for conservation and recreation in our community.”

·         The bill would commission the National Park Service to conduct a three year Special Resource Study on whether to add the entire Santa Monica Bay coastline from Venice Beach in Los Angeles to Rat Beach in Torrance, as well as the Ballona Wetlands, Ballona Creek, Baldwin Hills and San Pedro coastline to the Santa Monica Mountains National Recreation Area.

·         The results of the study and public hearings would form the basis for follow-up legislation to add the recommended areas to the 150,000 acre National Recreation Area that currently encompasses the northern Santa Monica Bay watershed from the Hollywood Hills and Santa Monica to Point Mugu.

·         Adding these areas to the Santa Monica Mountains National Recreation Area would make federal scientific and infrastructure resources available to maintain open space for conservation and recreational use in urban areas without affecting private property rights or putting additional costs on state or local government.  It would also bring the first National Park Service presence to South Los Angeles, the South Bay cities and San Pedro.