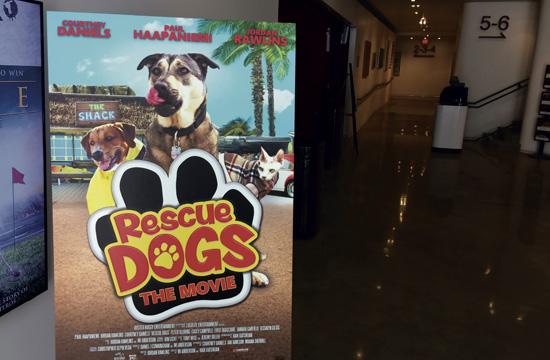 There were all the trappings one expects from a movie premier: mingling among chicly-dressed actors, filmmakers and guests, red carpet photos and craft services. The presence of rescue dogs wandering between premier-goers’ legs, was not quite as standard, but “Rescue Dogs: The Movie” is in a class of its own.

The film had its world premiere at the revamped Laemmle Monica Film Center Saturday with the real stars of the film, rescue dogs, out in full force.

The event was held in partnership with Hounds and Heroes, a nonprofit that connects wounded veterans with rescue dogs while advancing awareness of cruelty towards animals.

Twenty animal rescue charities partnered with the film to host adoption events for opening weekend. Part of the box office earnings at each theater will benefit its associated charity.

“I think it’s a great opportunity to use entertainment to bring knowledge of how awesome rescue animals are,” said lead actress and producer Courtney Daniels, who owned eight rescue animals at the time of production. This is the third film from her production company, Busted Buggy Entertainment.

A talking-dog family film that features actual rescue animals, the movie follows the shenanigans of Tracy and his dog Charger (played by Daniels’ own rescue dog Baron) as they try to keep a greedy businessman from building a golf course over their beach restaurant.

Testimonies from the filmmakers show that a love for rescue animals is at the center of the film. “Any stress that comes while working on a film vanishes pretty quickly when the animals are on set,” said actor Paul Haapaneimi.

Daniels herself said that even though her rescue dog Baron wasn’t professionally trained he “really took to it quickly and might have even pushed “diva” status!”