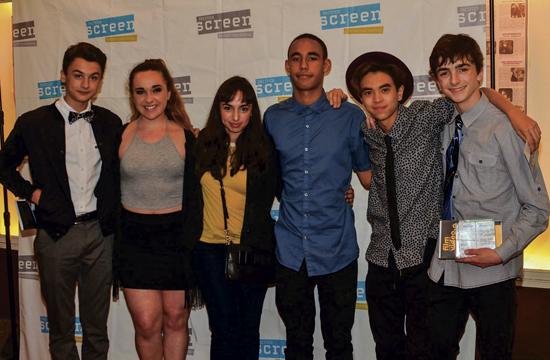 Movies, movies, everywhere movies. Film fanatics from all over Southern California gathered at the Aero Theatre in Santa Monica recently for an evening of fun and films. It marked the 9th year for The Pacifica Screen Student Film Festival, sponsored by Pacifica High School.

The event began as a showcase for students inside the film program at Pacifica to present their films to their friends and classmates before morphing into a festival. The first year there were only five films. Michael Balsey, Director of Programming and Communication at Pacifica developed the film program to help facilitate the interests of some of his students. Today, they have a full scale film program where students follow a production track similar to what might be found in a high end university setting. The program begins with the study of movies from a critical perspective before the students begin working on group projects as upperclassmen; working under the guidance of a full time faculty advisor.

The festival received over 150 film submissions from 34 high schools across Southern California covering over 300 miles of coastline. The event ran over two days showcasing both short fiction narrative and documentary films. Award balloting was done via text message in real time and prizes were handed out minutes later. Some of the award categories included best comedy, best technical achievement, and best short film.

The keynote speaker for the evening was Ayanna Floyd, Co-Executive Producer of the hit series “Empire.” She talked about her experience of growing up in a non-artistic family in Toledo, Ohio, and her path to a creative career in Hollywood. She had incremental successes from college to graduate school, to landing her first jobs in Hollywood. She encouraged students to challenge their creativity and to devote much of their spare time to exploration and reading mentioning that, “Nobody can teach you how to think creatively.”

The first evening saw 17 short films exploring a range of ideas and feelings from the trivial and reductive to the genuine and original. Some of the themes included death, loneliness, fear, and obsession. In the majority of instances the films on screen were the first taste of filmmaking that the creators had ever experienced.

Nicken Mirsepassi and Alberto Kersh from Santa Monica High School made a made a film that was inspired by the song “Fall Back to You,” by Cromeo. Before they settled on the subject of street photography they set out to make a film that would fit into the exact time frame of the music. The result was a great silent film documenting the anxiety and thrill of street photography score to a funky beat.

Pacifica student and winner of the Best Short Film award, Austin Combs-Perez, made a high-concept film about regeneration and personal redemption that was inspired from his personal life. It follows a young skateboarder who learns to find peace within himself and then shares the message of peace with another asking her to pass it on. He spent seven days in production and was inspired to turn the idea into a larger metaphor through the encouragement of his mentor Regina Hoffman, who leads the film program.

It was an inspiring night and whether they were recognized with a prize or not each contestant was an award winner. The fact that any young people could tamp down the stresses of school and homework to step out and attempt to express themselves creatively in a public setting is inspired and inspiring. There was a certain buzz of excitement in a new creative beginning and the first strides in creative minds that were just beginning to find their voices. The best is yet to come.