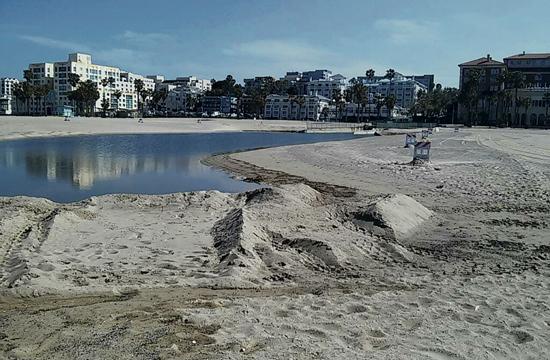 Adhoc signs were placed on Santa Monica beach late Wednesday afternoon, advising swimmers to avoid the Pico Kenter Drain area. The fact that the Santa Monica City signs came almost a full workday after the Pico Kenter Drain was opened into the ocean without warning in the morning, has outraged residents and lifeguards alike, causing the raising of eyebrows across the community.

“The fact that the drain was opened up without any warning is really bad in terms of any notification process,” James Alamillo, Beach Report Card Manager with Heal the Bay told The Mirror. The opening of the drain is a scheduled, planned process, according to Alamillo, and there is no reason that people were not made aware of the situation.

Santa Monica City’s Assistant Manager Water Resources Operations, Gary Welling, told The Mirror that going forward, they promise to do better next time. The City opened the drain in a proactive move, Welling said. They neglected to inform the public.

Resident Larry Price, who is a member of the Surfrider Foundation was on the beach Wednesday morning when he saw Santa Monica City workers in a bulldozer, opening up the Drain that flows directly into the ocean.

“About a half dozen-to a dozen people were in the water about 100 ft. from the drain,” Price said. “There were no warning signs or anything.”

Lifeguard Will Maguire captured video and photos while hearing the news off-duty.

Even though the water looks clear, that doesn’t mean that it’s clean. And while Welling explained that much of the potted water was from the ocean’s high tide, there’s no telling the actual breakdown.

“The water can contain a lot of pollutants,” Alamillo said, “fecal coliform, bacteria, and pathogenic materials – these can call cause illness and serious health effects.”

Resident Price said that he understands that the drain needs to be opened every now and then, but he is outraged that no swimmers were warned about the outflow.

He also questioned the timing in-line with the swimming/surf conditions.

“It would have been a good time for them to do it Monday,” Price said, as there was so much wind and surf and the beginning of the week, that the dirty water could easily be dissipated and no people were in the water.

“They [the City] need to find a better way to handle it,” Price said. “It’s just not…healthy.”

“Safety is a primary concern, and we had more water than usual,” Welling said. Going forward the City has pledged to provide at least two days’ notice of draining to residents, including caution tape and physical signs.