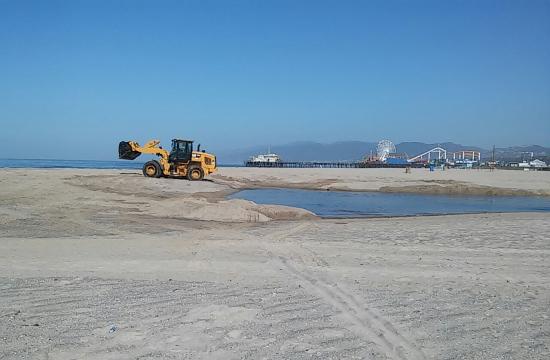 Resident Larry Price, who is a member of the Surfrider Foundation was on the beach this morning when he saw Santa Monica City Council workers in a bulldozer, opening up the Pico Kenter Drain that flows directly into the ocean.

Will Maguire captured video and photos while strolling down the beach this morning.

"About a half dozen-to a dozen people were in the water about 100 ft. from the drain," Price told The Mirror. "There were no warning signs or anything."

While Price said that he understands the drain needs to be opened every now an then, but he is outraged that no swimmers were warned about the outflow.

He also questions the timing with the swimming/surf conditions.

"It would have been a good time for them to do it Monday," Price said, as there was so much wind and surf and the beginning of the week, that the dirty water could easily be dissipated and no people were in the water.

"They [the City] need to find a better way to handle it," Price said. "It’s just not…healthy."