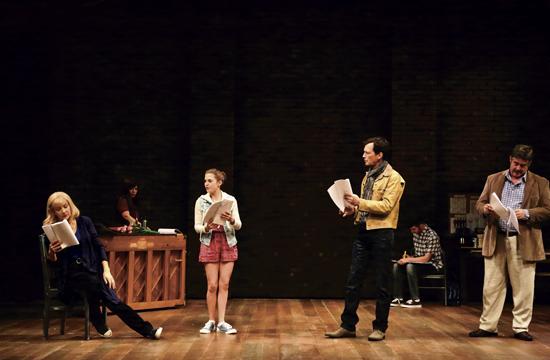 Before launching into a review of “Stage Kiss,” I think it important to say a word or two about satire. Many of us are familiar with “Saturday Night Live” or the famous “The Second City” where no subject got past the long reach of their collective satirical eye. This genre, which actually goes back to early Greek plays, does not appeal to everyone’s theatrical taste palette. Some may not find it funny while others might actually be offended. No judgment intended. I am, however, one of those people with a giddy sense of humor and am a sucker for satire or “low-brow” humor. I have to admit that a pie in the face or someone slipping on a banana peel, tickles my funny bone. So, I plead guilty to being a fan of such comedy, which brings me back to the play at hand.

“Stage Kiss” premiered at Playwrights Horizons in New York City and earned an Off-Broadway Critics’ pick. Performed on the West Coast for the first time, Miss Ruhl’s clever send-up of the drama, which takes place backstage as well as off stage, has travelled well. Illuminating the angst, Ruhl’s “insider script” sheds a light on the insecurity housed in some actors and directors, and the sometimes-blurred lines between make-believe vs. real life realities. “Stage Kiss” definitely moves back and forth between those two worlds.

A very well written Act 1 begins with “She,” or the character of Ada Wilcox, a neurotic actress played amazingly well by Glenne Headly who has sharp comic timing and a playful vocal instrument. Entering a bare stage, she is auditioning for a lead role for the first time in years and is nervous. She is late which adds to her anxiety. Before Ada can settle down and read the “sides,” (her scenes only) she asks permission to move the chair which faces her audition partner Kevin, well played by Matthew Scott Montgomery, who contrasts her broad reading with just line readings. Stalling, she now asks the director to tell her the story line, which basically is about a woman who is dying of cancer and her wish is to see her former lover for the last time. The clearly inept director, appropriately played by Tim Bagley, sits patiently at a table, answers all her questions, and waits until she stops flitting about the stage and finally settles down. The scene calls for her to kiss Kevin and she says, “Do you mind if I kiss you? You look so young so I don’t want to traumatize you.” When they come to the kiss, the gymnastics are hysterical as they try to physically figure out how to do it. At one point, the director asks her if she can sing and she says, “I can learn to sing” and unhappy with her audition adds, “I could learn to act, too.”

Miraculously, she is cast in the role and rehearsals are about to commence. Meanwhile, unbeknownst to Ada, her former lover, deliciously played by

Barry Del Sherman, has been cast to play the role of her former lover who is a successful sculptor living in Sweden. Initially, there is tension between them, but remember the name of the play as there are multiple, and I mean multiple, long, passionate kisses which ignites their old feelings for each other.

Since that affair, the actress has moved on with her life and is now married to investment banker Jack Wilcox, amusingly played Stephen Caffrey. His characterization is solid as the understanding and sometimes-cuckolded husband. John is not married but lives with his girlfriend Laurie, well played by Melody Butiu. She is a schoolteacher from the mid-west and comes off as a loving, kind, spiritual woman. Laurie appears to be totally indifferent when she barges in on John and Ada who have just spent a sex-filled night in this cramped apartment. She scurries around the apartment unpacking groceries and offering Ada coffee. We find out later that she has an unusual yardstick for relationships. Ada’s blue-haired, demanding, foul-mouthed daughter is played by Emily James, who also plays the maid.

As is the norm for actors to question motivation during rehearsals, John turns to the director, who is always eating or drinking something from a container, and asks about a moment. The director offers the well-known cliché, “Follow your instincts,” which is code for not knowing exactly what to do in that particular moment. At one point, Ada comments “This play is kind of awful,” and in fact the play-within-the play is deliberately awful and eventually the unpleasant reviews substantiates her opinion.

It’s close to opening night and John, who sprained his ankle, is on crutches. Kevin, who is gay, is John’s understudy. When asked to do the role he is fearful that if he kisses Ada, the audience will say, “Really?” Sure!” “And I will get laughed off the stage.” So, in true show biz tradition, John consents to perform on opening night, crutches and all.

Most of the action in Act I basically takes place on a bare stage. Finally it’s opening night and Scenic Designer Keith Mitchell transforms the naked stage into a beautifully designed lavish set. The director greets the audience asking them to turn off their devices informing them, “There will strobe lights and gun shots for those of you who have seizures.” This is a good time to mention that John Ballinger’s original music is delightful in its grand Broadway musical tone and creates excitement for the opening and ensuing scenes. Adding to the perfect look of the production is Lap Chi Chu’s splendid lighting design and David Kay Mickelsen’s creative costumes.

Alas, as in too many plays, Act II does not measure up to Act I, and starts dragging about one-third of the way through. There are scenes with a hooker and her pimp, also characterized by Matthew Scott Montgomery. At one point the director barges in on John and Ada to tell them he has a new play in mind and begins to unfold the story. It was at this point that I looked at my watch and thought, “This play really has to end.” So in summary, it’s worth seeing the play for the originality of Act I, which is well-written satire served by an excellent cast and spot-on direction by Bart DeLorenzo, who keeps the pace moving at its best comedic pace and elicits wonderful performances from this talented ensemble. But, I wish someone would have said “cut” sooner.