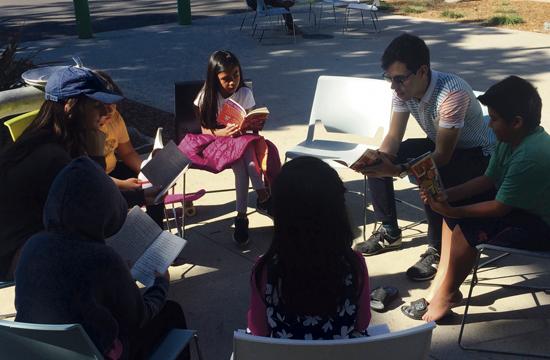 The simple act of reading aloud serves as the beginning of an education for some and as a continuation for others. The Reading Mentors program at the Pico Branch Library has been developed to accommodate the full spectrum of learning stages.

Initiated two years ago as a partnership between the library and Santa Monica College (SMC), the program allows children in grades K-5 from the Venice and Santa Monica area the opportunity to read socially with SMC student volunteers.

It started with a course taught by SMC professor Steve Kaufman called “Philosophy in Children’s Literature,” which uses children’s books to give students the tools to think, write and communicate philosophically, and asks a central question: “Do adults necessarily know better than children?”

While Prof. Kaufman started the Reading Mentors program as a way to answer that question while providing a chance for students to fulfill their community service opportunity, it has inspired growth in both the adults and children involved. Many of the volunteers in the program, now in its third semester, have continued to participate long after fulfilling the requirement.

“I’m moving back to Tennessee in June but if I wasn’t then I would still participate every year,” says two-term reading mentor Seth Worsham.

Occurring weekly over two six-week sessions a year, groups are divided into three to four children per mentor who take turns reading page-by-page, stopping to discuss completed sections. The discussions vary from movies of which a certain section reminded the children to philosophical questions such as, in Prof. Kaufman’s words, “What does it mean to be a Moose? If you put a human brain in a robot’s body is the robot still a robot? What is a friend? Would you rather have all the money in the world or would you rather have all the happiness in the world?”

So not only do the kids involved – many of whom are first generation immigrants – receive extra reading assistance, but they are inspired to ask universal questions. And the students, who may not have interacted with young children before, learn to maneuver through potentially uncomfortable situations.

“The children start realizing that they have philosophical and critical abilities and the students, the SMC students realize too that there’s not much difference between children and adults,” said Kaufman.