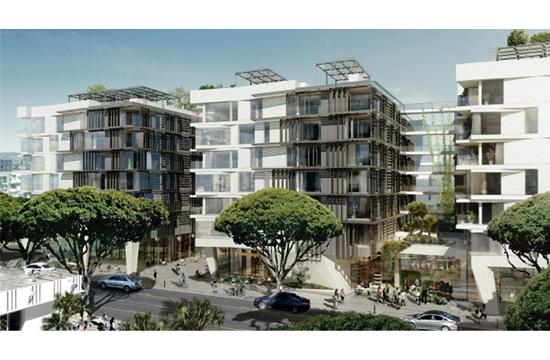 The hotly-contested 500 Broadway mixed-use development was back before Santa Monica City Council Tuesday evening, with the project set to soon be on its way to the Architectural Review Board (ARB).

The first reading of the Development Agreement was approved by City Council, with three amendments expected to return shortly to Council as part of the project’s second reading, according to the City’s Planning & Community Development Department.

The amendments include: 1. The addition for City Council to be notified if the promised market space in the project isn’t leased by a market within 180 days. 2. Specifications excluding office rentals, vacation rentals and corporate rentals for residential units to be in the agreement and also in all residential lease agreements. 3. An allowance of only a 4 percent reduction in upper floors’ space should design changes be required by the ARB.

More than 40 residents stepped up in support of the project Tuesday evening, echoing calls for a downtown Santa Monica revival.

“We are fortunate that such high quality projects can be built in Santa Monica to help address our housing crisis,” Councilmember Terry O’Day told The Mirror.

The 500 Broadway project would involve the demolition of the existing one-story commercial (Fred Segal) building and a surface parking lot, and the construction of up to 316,653 sf of mixed use development in a 84-foot high building, according to the City.

The project would also include approximately 5,500 sf of ground floor open space, including a public plaza with seating, landscaping, outdoor seating for dining, and widened sidewalks.

In addition to market-rate housing at 500 Broadway, the project would include the development of 64 deed restricted affordable housing units to be provided off-site at 1626 Lincoln Boulevard.