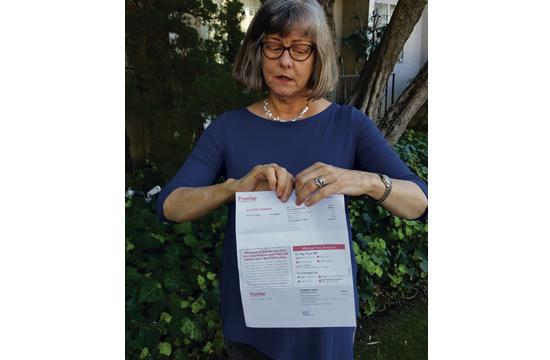 On April 1 this year Frontier Communications took control of 3.3 million new voice connections, 2.1 new million broadband connections, and new 1.2 million FiOS video subscribers that had previously been the domain of Verizon Communications in California, Texas and Florida. When this $10.54 billion deal was announced in February of 2015 the CEO of Frontier Communications Daniel J. McCarthy said, “We will transition our revenue to a more diversified mix, improve our growth prospects, create sustainable value for our shareholders and provide a great experience for our new Frontier customers in California, Florida, and Texas.”

It may have achieved many of McCarthy’s afore-mentioned claims, but judging from numerous calls to The Mirror, a flood of other media reports, and an avalanche of woeful tales on social media, the experience for many customers has been less than great, with many people in Santa Monica and elsewhere reporting internet, television and phone outages, in addition to billing anomalies and unsatisfactory interactions with Frontier Communications Customer Service staff.

The Frontier Facebook page’s most recent status posting from April 20, 2016, consisted of a paragraph extolling the virtues of “spending time to go through your files to ensure that your computer is organized!” Although this is obviously valid advice, some could say that in the light of evident problems resulting from the takeover of Verizon Wireless services, the timing of such encouragement could be seen as ironic. This post by Frontier Communications received over 1,380 comments with the majority complaining of lack of Internet, TV or phone service, billing problems, and unsatisfactory service from Frontier Communications customer service representatives and technicians.

Several Santa Monica residents have suffered as a consequence of the problems resulting from the changeover, including 30-year-plus Verizon customer Lynn Peterson, who told us that, “My service just kept going out over and over again ever since Frontier became my provider. Whenever I called customer service they seemed completely indifferent. I have now switched to Time Warner Cable.”

Another Santa Monica Resident, Alan Redhead of Sunset Park, complained that his TV service “went out several times,” and in addition he claimed that his internet appeared to offer noticeably slower performance than it previously had done so when he was with Verizon FiOS.

Some customers have attempted to express their dismay by reporting the issues to The California Public Utilities Commission, with the body reporting several hundred complaints. These complaints prompted the chair of the Utilities and Commerce Committee, California State Assembly member Mike Gatto, to issue a statement saying that there has been an “alarming rate of telephone and Internet outages in Southern California, and consumers are frustrated with the lack of a solution to this months-long ordeal.”

In response to an enquiry to Frontier Communications by The Mirror, we received, via an email, the following press release:

Communications services are critical to the daily lives of our customers, and we apologize to every California customer who has experienced service disruptions. While we have restored service to the majority of these customers, we are working to resolve any remaining service-related issues. At the same time, we are operating and maintaining the network, taking care of business-as-usual issues, and ensuring that all conversion-related customer credits are issued.

Frontier is implementing measures to improve our customers’ experience:

Frontier has completed training for over 4,000 customer service representatives and field technicians (formerly Verizon employees who have been supporting California customers for years) – which training could only begin after they became Frontier employees on April 1. Completion of training means Frontier is now handling repair and installation activities at a faster rate.

2 During the training period, we relied on a mix of U.S.-based and offshore customer service contractors. We, like many of our customers, are deeply disappointed in the quality of customer service these vendors provided. Therefore, we will eliminate any reliance on overseas customer service agents by no later than July 30, 2016.

3 We have expedited handling of any out-of-service customers who have informed us of special needs (elderly, medical necessity, disabled, etc.).

4 Bill credits will be issued to every customer who reported a service outage. This credit will be reflected on these customers’ bills by the end of June. There is no need for the customers to contact us again to receive this credit.

5 To further empower California customers, we have introduced another way for
our customers to provide Frontier with
direct feedback: via email at LetMelindaKnow@ftr.com.

6 We are resolving the temporary, limited availability of movie and television content in the Video on Demand (VOD) library. The VOD system is functioning today, we are working to load more than 100,000 titles into the VOD library, and we have placed a priority on loading the most popular content first. We expect to complete this process within the next several weeks. We will also ensure that all content that customers have previously purchased is available to them.

Again, we apologize to any customer whose service was impacted during this transition.  Every customer matters to us, and we are working hard to earn our customers’ confidence. Thank you for your patience and for allowing us to serve you.