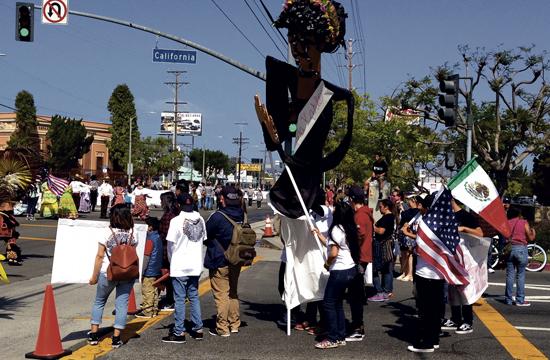 The Family Center, alongside a myriad of Santa Monica and Venice organizations and businesses, drew from far and wide in making the day a huge success.

Winding its way through the streets, the parade ended with a festival at Penmar Park in Venice where food trucks, jewelry and clothing stands, a guacamole contest, and performances by local bands greeted attendees.

The festival’s roots trace back to the Chicano movement of the 1960s, which began both as a way to secure human rights for Mexican immigrants in America, as well as establishing a collective history and national identity in America, organizers explained.

The event was revived this year to enable Mexican-American residents of the Westside to express their cultural heritage together in response to rapid gentrification pushing poorer tenants out of their homes to make way for a growing middle class, de la Torre said.

“We want to let the world know that Mexican-Americans have always been a part of the development of West L.A.,” he added.

A sense of community pervaded the whole event. Watching the parade was a mix of silent onlookers, as well as the friends and family of those in the parade, showing their support as the parade marched on.

To many, Cinco de Mayo, May 5, is a celebration of specials on margaritas. Its original purpose was to commemorate Mexican soldiers’ defeat to invading French forces in 1862. While this has been largely forgotten, it is the cultural significance that this year’s festival tapped into, bringing together community members in support of education, peace and unity.

De la Torre said that he intends to keep the parade and festival an annual tradition.