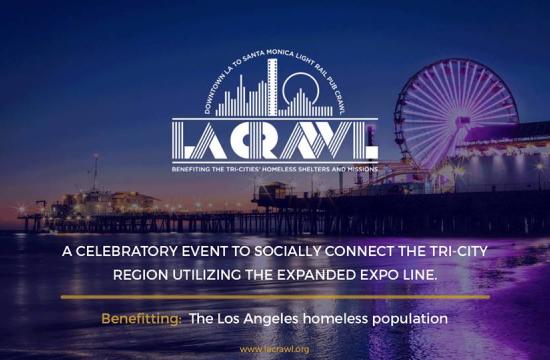 On May 20, Metro’s Expo Line, which connects Culver City and Downtown by light rail, was expanded to include service to Santa Monica.

Four years ago, Woodie Hamilton, who at the time was working as a community relations liaison between the Westside and Downtown, was looking forward to this new Metro line, which would streamline his work commute. That got him thinking about what a train connecting these three disconnected parts of Los Angeles could mean for the city in a broader sense.

“Beyond moving people on a piece of steel from point A to point B, there’s an economic message that’s not really been broadcast,” Hamilton said.

The possibilities of expanding the notion of residents’ local communities to include these regions now accessible to them by public transportation became the foundation for an advocacy organization he then founded called Tri City Alliance.

Hamilton got in contact with elected officials, business improvement districts, chambers, governmental heads and business leaders to support his vision.

“This is a classic win-win proposition,” was the response of Rod Gould, who was Santa Monica City Manager at the time, to a partnership program centered around the expanded light rail line.

Hamilton focused on securing support from businesses like hotels, restaurants, retail outlets and entertainment venues, which would attract the most visitors from other regions. One advantage of travel by public transportation is that it’s easier to coordinate larger groups of people, and many local businesses were receptive to the notion of more customers from other parts of the city.

Earlier this year, with the Expo Line in Santa Monica almost ready to officially begin service, Tri City Alliance had to come up with a concrete plan on how to leverage the connections they had spent years building.

“We decided to do what most people like to do,” said Hamilton. “Have fun, enjoy ourselves, celebrate and have a great time.”

This was the idea behind a series of three upcoming events designed to both build synergistic partnerships between city officials and businesses in the three Expo Line regions, as well as make sure participants have a whole lot of fun in the process.

The first of these events is called LA Crawl, and is a pub crawl for residents of or visitors to Santa Monica, Culver City and Downtown – the three areas now connected by the Expo Line – to go out and explore neighborhoods outside their area of residence.

This is possible thanks to a tool implemented into LA Crawl’s official website, which designs custom itineraries for pub crawl participants. A Santa Monica resident, for example, will set Santa Monica as their primary location. The tool will then create an itinerary of 15 locations outside of Santa Monica that are easily accessible by light rail. That way, participants are given a simple and personalized way to explore the city. 90 businesses are currently participating in the event: 50 Downtown, 30 in Santa Monica and 10 in Culver City. Partnerships with Uber, Lyft, CicLAvia and Yelp are helping to get the word out to LA residents, and ensure that transportation is locked down for anybody wanting to take part in the event.

A portion of the proceeds from ticket sales for the event will go to organizations in the Tri-Cities dedicated to combatting homelessness; including missions, resource centers and homeless shelters.

Occurring the same day are Coast: Santa Monica’s Open Streets Event, and the Historic Core BID’s Shopwalk Downtown Neighborhood Block Party, which happens the first Sunday of every month. These are both events aimed at showcasing local businesses in Santa Monica and Downtown LA respectively. In conjunction with LA Crawl, residents of neighboring regions will be able to easily take part in these events.

“People feel the urgency. They want the connection to happen,” Hamilton said. Although this is the first tri-regional event in LA, the response by business partners and pub crawl participants has been overwhelmingly positive.