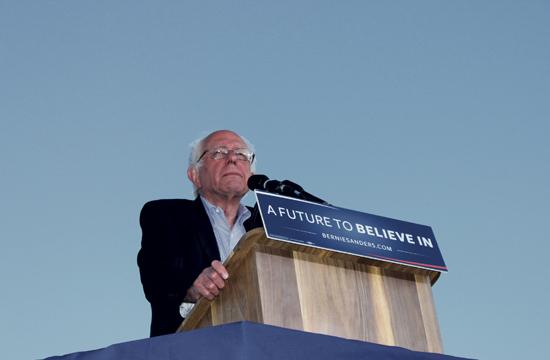 The opening of the Expo Line three days earlier helped to combat the forecast traffic jams, with the heavily-policed area surrounding Samohi moving at a steady pace.

Lines from the rally entry gate on Olympic stretched down 4th Street and east on Pico well before the event opened at 4pm, with attendees appearing unfazed at the impending three-hour-plus wait for Sanders’ arrival.

Held under spotlight on Samohi’s sports field, the event kicked off with local musical appearances and short speeches; actress Rosario Dawson welcomed Dick Van Dyke to the podium, before Sanders himself addressed the crowd to resounding applause.

“Sanders will discuss a wide range of issues, including getting big money out of politics, his plan to make public colleges and universities tuition-free, combating climate change and ensuring universal health care,” according to his campaign.