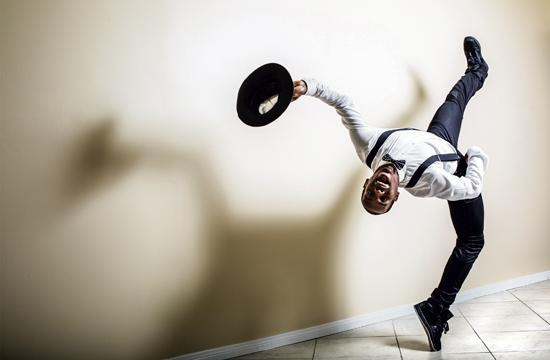 For his Los Angeles stage debut, the one-of-a-kind artist will share his iconoclastic vision, performing on sneaker pointe with music by one of today’s youngest and most accomplished classical cellists, Mihai Marica.

Charles “Lil Buck” Riley became an overnight phenomenon after his improvised performance with cellist Yo-Yo Ma went viral on YouTube in 2011, resulting in Ma declaring him a “genius.”

Since then Lil Buck, with his “elegant ripple of movement and footwork, exuberant and seemingly gravity resistant,” has amassed an impressively diverse performance history: from performing with Madonna and with Yo-Yo Ma, to dancing in Cirque du Soleil’s Michael Jackson: One. He’s worked with such arts innovators as Spike Lee, Mikhail Baryshnikov, and Benjamin Millepied.

What Moves You is an intimate duo collaboration between Lil Buck and one of today’s youngest and most accomplished classical cellists, Mihai Marica.Lil Buck and Mihai will present an interactive performance that reveals the intricacy and immediacy of the creative process between movement and music, and challenge the boundaries of what the two instruments – the body and the cello – can do. From J.S. Bach to the contemporary sounds of living composers, the duo will demonstrate what it means when Lil Buck says, “I see sounds everywhere.”

Lil Buck began jookin – a street dance that originated in Memphis – at age 13 alongside mentors Marico Flake and Daniel Price. After receiving early hip-hop training from Teran Garry and ballet training on scholarship at the New Ballet Ensemble, he performed and choreographed until relocating to Los Angeles in 2009. Named one of Dance Magazine’s 25 to Watch, his collaboration with Spike Jonze and Yo-Yo Ma performing The Swan went viral in 2011.  This opened the door to collaborating with a broad range of renowned artists ranging from Janelle Monae to JR and the New York City Ballet to Madonna. Buck is acclaimed as a versatile artist and channels his creativity and charisma into works spanning the performing arts, commercial endeavors, and is a vocal advocate of arts education with a firm belief that art facilitates the learning of everything else.