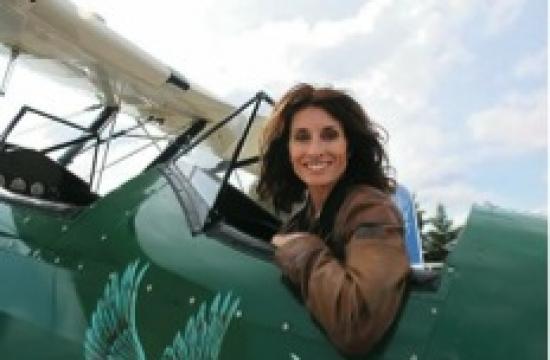 World renowned Aviator, Adventurer and International Speaker Tracey Curtis-Taylor is scheduled to arrive at Santa Monica Airport on the afternoon of Sunday May 8th, completing the sixth leg of her biplane flight to the east coast. During her short visit to Santa Monica and Los Angeles, Tracey will meet with members of the press and public and talk about what inspired her to plan and execute an around the world flight in a vintage Boeing Stearman biplane.

Retracing the aerial route first surveyed by Charles Lindbergh for the U.S. government, she will visit 16 major U.S. cities spread across America’s heartland and will finish in Boston to complete her circumnavigation of the globe that began in 2013. In the last two years Tracey has flown her vintage aircraft more than 26,000 miles around the globe.

On Tuesday May 10, 2016, at 10:00 AM, Curtis-Taylor is scheduled to depart the Santa Monica Airport piloting “The Spirit of Artemis." Tracey’s transcontinental flight is a celebration of the Boeing Company’s "Century in the Sky" and a tribute commemorating the beginning of Air Mail in America and its valiant pilots, many of whom paid the ultimate price for pioneering the United States Air Mail service.

Tracey’s Curtis-Taylor’s primary mission is to inspire young women to set their sights sky high by pursuing their dreams and becoming immersed in the STEM (Science, Technology, Engineering and Math) programs in their local schools. Her flight is a continuation of a long tradition at Santa Monica Airport where the first women’s air race, The Powderpuff Derby, launched from Santa Monica Airport in 1929.

The observation deck is located at the airport administration building at 3221 Donald Douglas Loop South, Santa Monica, California 90405 and is open to the public year round. On this special occasion people are encouraged to come early and bring cameras to capture this historic event. Volunteers from The Santa Monica Airport Association will be on hand to help facilitate the event. For more information visit www.santamonicaairport.info.

Join your neighbors at the Santa Monica Airport to witness this once in a lifetime event!