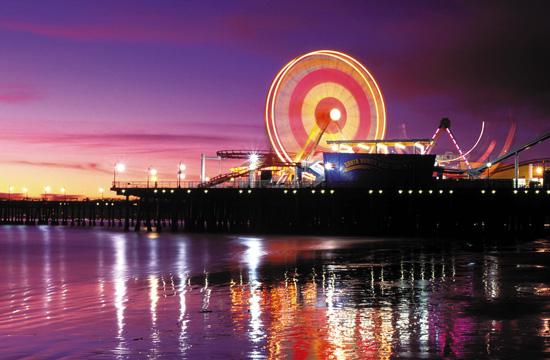 Pacific Park on Santa Monica Pier has begun illuminating one of its Ferris wheel’s 20 gondolas each day since May 6 to spotlight a park milestone, starting with 1996, in honor of its 20th birthday celebration at the end of the month.

The Ferris wheel itself is now fully dark through May 25 to make way for a nearly $1-million new lighting package that will feature higher resolution, greater color depth and faster “frames per second” display speed. The Ferris wheel is open for rides during the installation.

Pacific Park on the Pier opened May 26, 1996, with the new Ferris wheel lighting package is part of the 20th Birthday celebration.

The Ferris wheel lifts riders over 130 feet above the Pacific Ocean, offering extraordinary views of the Southern California coastline.

All 20 gondolas will be illuminated on Wednesday, May 25, and will set the stage for the Ferris wheel’s new lighting package reveal the following day.

“Our crew here at the pacific park has been working on this for well over a year,” Nathan Smithson, marketing and sales manager for Pacific Park, said. “It has been a very lengthy but also very exciting process”.

The new LED lights intend to be assembled and fully functional by the end of May 26 and will offer a lot more than the previous light fixture, which could only produce eight different colors.

“These are state of the art cutting edge LED lights,” Smithson said. “The amount of displays we’ll be able to recreate will be unlike anything we’ve ever seen before”.

Each day until the birthday celebration, one gondola is illuminated with LED lights at dusk.

“The twenty days was kind of a happy accident,” Smithson said. “It just occurred to us that the Ferris wheel has twenty gondolas and we’ve been open twenty years”.