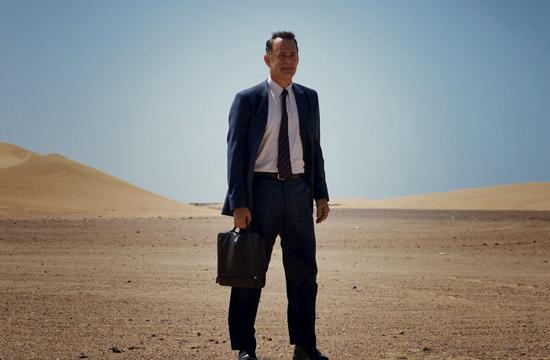 “A Hologram for the King,” based on the Dave Eggers novel and taking place in 2010, stars Tom Hanks as a divorced IT salesman named Alan Clay who travels to Saudi Arabia in hopes of selling the king of Saudi Arabia a three-dimensional holographic teleconference system.

Clay has trouble adjusting to his new surroundings. One of the ways this comes across is he keeps oversleeping every day. This causes him to have to call the same taxi driver every day to take him to his destination. The taxi driver, whose name is Yousef, is played by Alexander Black and does an effective job in a comedic role. Right when Clay gets in his vehicle, Yousef is very talkative and tries to bond with Clay, who at first does not seem receptive to this.

Complications and heartache ensue along the way with Clay experiencing emotional and physical crises of sorts. He is still trying to get over his divorce and his concerns about his daughter going off to college. Things do not get any better when he discovers a cyst on his back that may be cancerous. Also, his scheduled appointments with the king keep getting put off because the king routinely fails to show up. And then his colleagues are stuck in a tent trying to set up for their presentation with no internet connection, no air-conditioning, and a lack of food.

Clay’s visit with a doctor regarding the cyst on his back is a nice subplot in the movie. The doctor is played by Sarita Choudhury in a performance of subtlety and warmth. A romance of sorts develops between Clay and the doctor and the last 10-15 minutes of the movie in which the two of them go off together are the best part of the film.

The movie has an assortment of flaws. A road trip in which Hanks’ character takes with his driver to see Yousef’s family seems contrived and hard to buy since he did not know the guy all that well and was there on business. Hanks twice consumes way too much alcohol – the second time he feels like he might be having a stroke. One would think that he would have learned from the first time. Hanks saying he does part-time freelance work for the CIA to an Arab guy, even though it was a joke, was not smart on his part. When Hanks uses a knife to cut a cyst on his back – he should have known better. There is a repetitive feel to the narrative. The physical slapstick the film was going for when Hanks would fall down when he would try to sit on a chair or bench was strained. I found the Danish consultant coming on to him sexually in a party scene was overdone. The party scene, which takes place in a nightclub, seemed out of place in a movie aimed at a more mature audience.

The look of the movie, Hanks’ reliably good performance, and his interactions with the driver and doctor, though, are able to make the picture on balance worth seeing – although, it probably would not be worth paying full price.