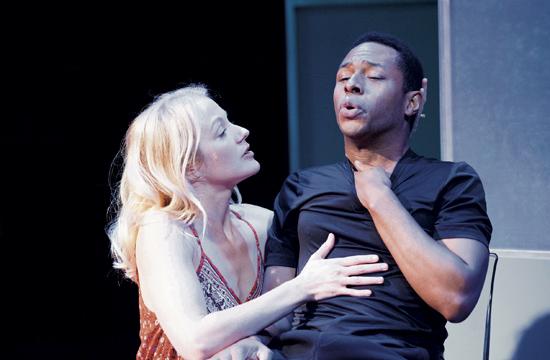 A revival of Greg Kalleres’ politically incorrect Honky, the production is not for the squeamish politically-correct individual as it presses the racist button at every twist and turn of the action.

Originally premiered in New York, Honky was subsequently performed on PBS television and one must wonder how the heavy usage of mother-f@#@ got past the censors. A one-act play sans intermission, it made its West Coast premiere at the San Diego Repertory Theatre and to say the play has travelled well would be an understatement.

Under the sharp, commanding direction of Gregg T. Daniel, who assembled a most talented ensemble, the play moves along at break-neck speed, maintaining the brisk pacing even during the multiple scene changes designed by Stephanie Kerley Schwartz, whimsically lit by Dan Weingarten, and underscored with a catchy sound design by Jeff Gardner.

Using designer basketball shoes as a metaphor for race relations, as well who is allowed to use the “N” word, the story revolves around an incident where a young African-American boy named Charlie Cross was shot and killed for a pair of Skymax basketball shoes. The controversial advertising campaign, approved by the president of the company Davis Tallison, well played by Bruce Nozick, was deliberately geared towards the urban population, code for the African-American consumer. The commercial ended with the word “S’up.” Mirroring the commercial, the shooter used “S’up” before killing the sneaker-wearing dude. Following the shooting, much to Nozick’s delight, sales to white kids increased dramatically, contributing hugely to the company’s bottom line. He is serious when he says, “I will even be happier when white kids start killing for sneakers.” Despite the success of the campaign, representing the board of directors, Dr. Driscoll played by Ron Bottitta has some surprising news for Nozick who, in his ignorance, refers to the “Jim Croce Laws.”

James Liebman brilliantly plays the continuously conflicted Peter Trammel, who can’t seem to complete a sentence without wandering off into non-sequiturs. He’s the guy who wrote the copy for the commercial and has taken personal responsibility for the death of the young man. The African-American designer Thomas Hodge, sensitively played by Burl Moseley, designed the shoe. He is conflicted about his work and the fact that he came from an affluent family and didn’t grow up in the “hood.” Will I be accused of racism by referring to Hodge’s ethnicity? This is precisely what the play is about – confusion over what is and what isn’t politically correct.

Taking you back to the beginning, the opening scene shows two young men, Matthew Hancock and Christian Henley, in the deadly slow-motion basketball sequence, which sets up the ensuing craziness. In the very next scene, Tom and Davis are having a conversation. He is clueless about his own racism and easily tosses around inappropriate references.  Meanwhile, the overwrought Peter, goes into therapy with Emilia Hodge who is uh, black and Thomas’ sister. Played with an initial professional demeanor, Inger Tudor as the therapist probes into Peter’s apparent racial discomfort. It’s a very funny scene as Peter goes through great lengths to make a point of not being racist but every word he utters is black related and he succeeds in digging his own grave by trying to correct everything he blurts out. In one of his slips of the tongue he describes his fiancée Andie as white, sinking deeper and deeper into a hole. The seemingly patient Emilia isn’t exactly who she appears to be and there are some amusing revelations into her own struggles and what she has to do to function. In one of the scenes with her brother Thomas, she asks him what he wants to talk about and he answers “Black shit.”

Peter’s fiancée Andie is a rather innocent scatterbrain who says whatever comes into her head without any filtering. A talented adorable Tasha Ames brings this lovable character to life. Her scenes with Peter illuminate her bona fide innocence contrasted against Peter’s guilt, who is tormented by his lack of understanding of anything.  Eventually she meets Thomas at a Skymax function. There is an immediate mutual attraction and they begin an affair. At one point, he comments “I find you refreshing for a cracker bitch.” In this send-up, racism is a two-way street.

Playwright Kalleres, formerly a copywriter for a New York advertising company, brings satirical insight into ongoing racial struggles and white guilt, as well as a comedic examination of targeted marketing. He does all this with a playful wink at the audience who had a really good time on opening night.