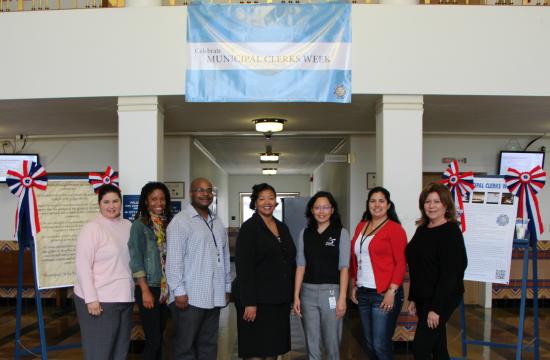 A Proclamation, issued by the Santa Monica City Council, on April 12, 2016 resolves that the week of May 1-7, 2016 is designated as "Municipal Clerks Week."

Adopted by the City Council, the Proclamation extends appreciation to all Municipal and Deputy Clerks for the services with which they provide their communities.  Specifically, the Proclamation cites that the Clerk "serves as the professional link between the citizens, the local governing bodies, and agencies of government at other levels."

The Proclamation was presented to City Clerk, Denise Anderson-Warren, and signed by Mayor Tony Vazquez.  It also honors Municipal and Deputy Clerks for "continually striving to improve the administration of their duties through participation in education programs, seminars, workshops and annual meetings of their state, county, city, and international professional organizations."

The International Institute of Municipal Clerks (IIMC), a professional association of Municipal Clerks, sponsors Municipal Clerks Week to highlight the importance of the Municipal Clerk’s roles and functions and the impact the office has on the public.  IIMC President Monica Simmons, MMC, and City Clerk for the City of Seattle, Washington, states that, "There are many responsibilities of the Municipal and Deputy Clerk that the public takes for granted, such as keeping the Council advised of legislation that affects them.  Yet, if Clerks are inattentive in their duties, then the efficient operation of our local government is greatly affected."  IIMC has 10,000 members throughout the United States, Canada and 15 other countries.

The mission of the Santa Monica City Clerk’s Office is to: serve the City as the Election Official, Political Reform Filing Officer and Custodian of the City Seal; conducting City elections; administer the Oath of Office and provide support to the City Council, and record all Council proceedings; manage the City’s records and respond to public records requests; and provide mail and printing services to internal Departments.

The office also: distributes Council meeting agendas and packets; in accordance with the Brown Act, posts agendas for the City’s Boards/Commission and maintains the Appointments List; maintains the City Charter, Municipal Code, Domestic Partnership Registry and soon the Lobbyist Registry starting in September 2016; is the agent authorized to accept service for legal documents; attests to contracts executed by the City Manager; and processes United States Passport applications.

The office will celebrate Municipal Clerks Week through promotions in the City Hall lobby and its office, and distributing giveaways and public information on the Records and Election Services Department.