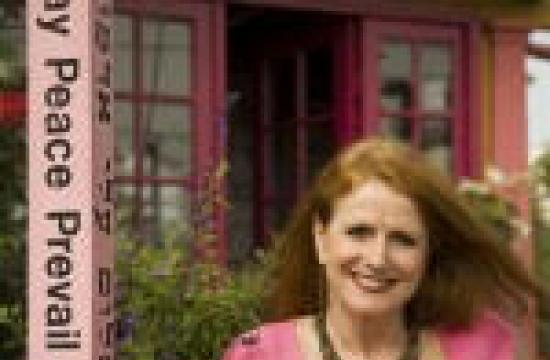 Jodie Evans, co-founder of CODEPINK, will be the special guest speaker at the Monday, May 16 Activist Support Circle monthly public forum taking place from 7:00pm until 9:00pm at the UnUrban Cafe located at 3301 Pico Blvd., Santa Monica

Jodie Evans is co-founder and co-director of CODEPINK and has been a peace, environmental, women’s rights and social justice activist for 40 years. She has traveled extensively to war zones promoting and learning about peaceful resolution to conflict. She served in the administration of Governor Jerry Brown and ran his presidential campaign. She has published two books, “Stop the Next War Now” and “Twilight of Empire”, and has produced several documentary films, including the Oscar- nominated “The Most Dangerous Man in America” and Howard Zinn’s “The People Speak”.

She is the board chair of Women’s Media Center and sits on many other boards, including Rainforest Action Network, Drug Policy Alliance, Institute of Policy Studies. Women Moving Millions and Sisterhood is Global Institute. She is the mother of three.

The event is free and there is free parking at the adjacent U.S. Bank parking area.

The Activist Support Circle is an ongoing open support group for progressive activists that started in 2005 to help guard against activist burnout.

For further information call 310-399-1000 and visitwww.ActivistSupportCircle.org

By mirrormmg May 16, 2016
in Uncategorized
Related Posts