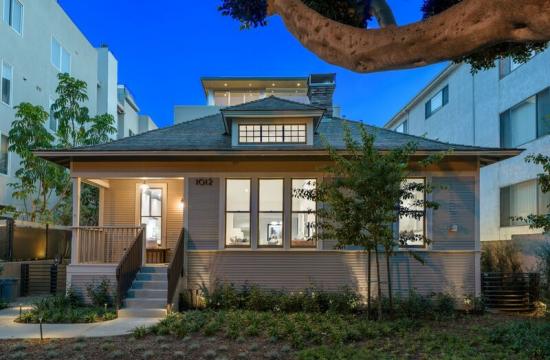 One of three remaining cottages, of an original seven that made up the Santa Monica Turn-of-the-Century Thematic District, has been restored by the City and developer.

The developer and architect, along with the City and Landmark Commission, worked together to restore Santa Monica’s “original town site” and the last remaining single-family residence on the 1000 block of 2nd St.

1012 2nd St. is the first project built within the City of Santa Monica that allows modifications of the Development Standards for projects that retain and preserve designated Landmark buildings, according to listing agents, the Pence Hathorn Silver team at Partners Trust.

There are now two homes on the block, and a new 2-story townhome to the rear.

“This [landmark] home is an example of one way a property owner can incorporate a compatible new structure, preserve a landmark structure and maintain neighborhood compatibility,” the agents said.

On the exterior of the home, as much as possible of the original Victorian touches in the architecture was restored and what they weren’t able to restore they replicated. The home was hand painted by brush, retaining some of the original paint.

All the exterior work was under scrutiny of the Landmark Commission and carefully studied and approved, from colors to materials. The chimney was restored using the original bricks and roof shingles were restored and replicated.