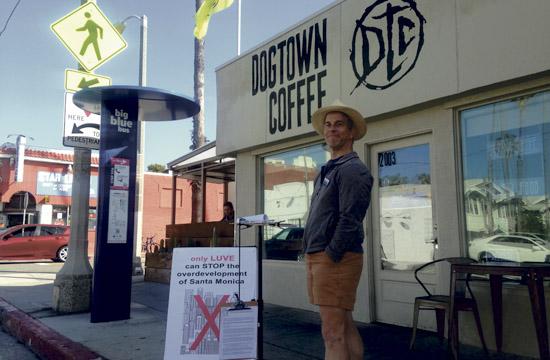 By Sam Skopp and Jennifer Eden

The Residocracy-backed neighborhood LUVE initiative has set themselves the target of meeting the required 6,500-signature mark today to ensure its place on the November 8 ballot.

The Land Use Voter Empowerment initiative was drafted by residents in a move to curb overdevelopment in Santa Monica, authors stated. The final day that they have set for for signature collection is Sunday, May 1.

“It looks like it’s going to be close, so this last weekend really counts,” said Tricia Crane, co-author with Residocracy founder Armen Melkonians of LUVE.

Crane has turned her Santa Monica patio into LUVE Headquarters with people welcome to stop by at any time to sign or pick up a petition. “Just use the Idaho gate,” she said.

Expect Santa Monica streets to be filled with collectors in coming days, as while the signature count is getting close to the coveted mark, verification of exact signatory details with voting records can often change numbers dramatically.

The initiative has caused great debate in the city, with art center Bergamot Station playing an active role in all-things LUVE. Developers are currently looking at space on the allotment for a hotel and offices – tenants, are standing firm.

Robert Berman has owned a gallery at Bergamot Station for 22 years, and is a vocal supporter of the LUVE initiative.

“[We] would like to keep Bergamot basically the way it is,” said Berman. “It works, and we’re in a very fragile economy.”

Bergamot is one of only two art gallery complexes on the West Coast, offering free admission to all of its galleries, located within easy walking distance from one another, Berman explained.

“We’ve agreed that we would like to see if we could get a bigger restaurant, maybe a bar and a community center for the Pico neighborhood,” he added, but is wary of any development that may infringe on what’s already been established.

Two major provisions of LUVE are limiting projects of over 32 stories, and encouraging low and moderate-income and senior citizen housing projects, according to proponents.

For residents who have been collecting signatures for LUVE, they must be dropped off