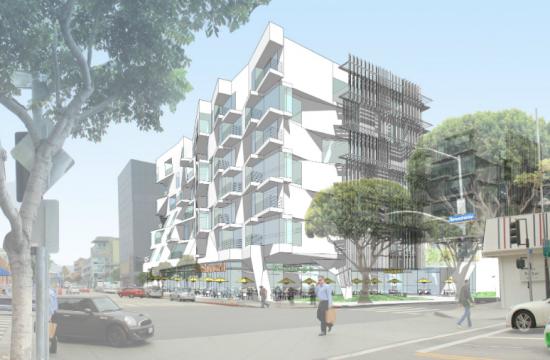 Adding 4,411 new daily car trips to Santa Monica by approving more massive development projects is our City Council’s idea of solving the jobs housing imbalance ratio. That’s what they did one and a half weeks ago on May 10th, 2016. Unanimously, arrogantly, and with no reservation, the council buttoned down the hatches and stuck to their guns. They’re at it again. Another six-zip vote as Mayor Tony Vasquez puts it. Special interests six – residents zip. At least that’s how I saw it as the Council unanimously voted to approve the massive development agreement project located at 500 Broadway, the former site of the Fred Segal building.

It defies logic. It defies common sense. It is a slap in the face of residents.

The approval came just five days after Residocracy delivered over 10,000 signatures from Santa Monica voters to City Hall in order to qualify the LUVE (Land Use Voter Empowerment) ballot initiative for this November’s ballot. Our elected officials once again proved they are out of touch with residents as they continue to transform Santa Monica into a high-rise high-rent metropolis while grinding our streets to a screeching halt.

The massive 500 Broadway project is 409 feet long, seven stories high (84 ft tall and over 100 ft tall when including roof top structures), and weighs in at 302,000 square feet. It is 2/3 the size of the Santa Monica Place mall on a parcel of land 1/6th the size. The projects own EIR identified significant and unavoidable traffic impacts from the 4,411 new daily car trips at the following four major intersections: Palisades Beach Road and California Incline (all peak hours), 4th Street and I-10 EB On-ramp (weekend mid-day peak hour), Lincoln Boulevard and Colorado Avenue (AM peak hour), and Lincoln Boulevard I-10 Westbound Off-ramp/ Olympic Boulevard (all peak hours.)

Unwilling to acknowledge the signatures of over 10,000 residents, gathered by Residocracy volunteers in under 60 days (that’s 15 percent of the voters of Santa Monica), the City Council put their heads in the sand and continued to push their policies of steroidal growth at all cost. Not one mention of Residocracy’s successful grassroots efforts to give residents a voice was made by a single elected official that night.

Instead, council member Kevin McKeown focused on how important it was that the massive project include a grocery store and made the motions required to approve the project which were seconded by council member Sue Himmelrich. Councilmember Ted Winterer focused on not allowing the Architectural Review Board to reduce the size of the project after City Council approved it. Councilmember Gleam Davis focused on the definition of corporate housing. Councilmember Terry O’Day was intent to give his opinion that Santa Monica is not one of the densest coastal cities by ignoring our workforce and visitor population altogether. And Mayor Tony Vasquez was waiting to eagerly announce the final score.

Well I got news Mr. Mayor. It’s not a game we’re playing. It’s our lives. It’s our city.

One thing was clear to me as I sat in council chambers and watched the discussions between council members on that night. They were thumbing their noses at residents and at our democratic process. It was clear that they were sending a strong message to the development community and to special interests that they are on their side. It was clear that the entire city council is pro-growth, no matter how they campaign and what they promise at election time. It was clear that every single one of them completely ignored over 10,000 Santa Monica voters and the power of LUVE.

And that is why it is so important that our grassroots effort to require voter approval for large development projects through the LUVE initiative be successful this November. And this is why it is so important to ensure that in November, the residents of Santa Monica elect city officials who answer to residents. We need elected officials who don’t just make promises at election time and then ignore the voices of 10,000 Santa Monica voters as they destroy our city on the dias.

Mr. Mayor, if anyone is keeping score, rest assured it’s the residents of Santa Monica. We will not forget what happened Tuesday night on May 5th, 2016 when you failed your constituents.

I am looking forward to the November elections where residents will sweep the special interests, and the elected officials controlled by these special interests, out of our City Hall once and for all. I am looking forward to the overwhelming success of the LUVE ballot initiative which will give voters the power to say no to 4,411 new daily car trips.

LUVE is the only answer to our over-development and traffic crisis in Santa Monica.

Supporters of 500 Broadway and opponents of the LUVE initiative were contacted by The Mirror for comment, however none could/wanted to respond this week. A few Councilmembers did reply to questions on the 500 Broadway approval in City Council last week, their comments are as follows:

Councilmember Kevin McKeown: Any time we opt for housing instead of commercial uses on a site, we minimize the additional traffic impacts.In general, any number of square feet of commercial creates three times the traffic that housing does. Affordable housing is even less of a traffic generator. These new units, including the affordable ones, are within easy walking distance of light rail. We begin to create a new lifestyle for Santa Monicans, one less dependent on cars.

Councilmember Terry O’Day: This project includes traffic demand management requirements and penalties, is extremely close to the Expo station, and is in a complete neighborhood that is the most walkable community in Southern California.It is a model of smart community building for quality of life and environmental sustainability.

Councilmember Pam O’Connor: on the inclusion of Affordable Housing units as a separate structure: One could say that renters are segregated into rent control buildings. Is there a problem with that as it’s another form of affordable housing?  Seems to me occupants of rent-controlled (aka affordable units) have been contributing members of the community for decades.The same is the case for existing affordable deed restricted units.