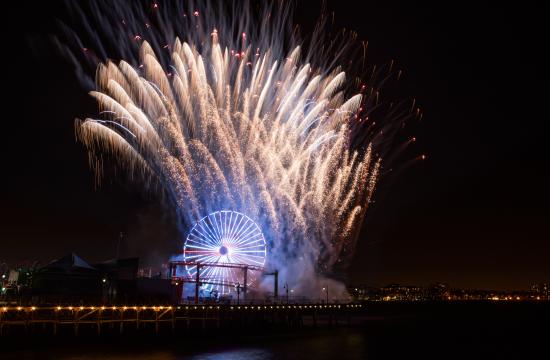 Accompanying the inaugural Ferris wheel lighting reveal is a custom track of music by composers Gabe Sokoloff, Greg Chun and the team at HUM Music in Santa Monica.

“The Ferris wheel lighting reveal will be a spectacular culmination of 20 great days of celebrating the illuminated gondolas while spotlighting Pacific Park’s and the community’s 20 year history,” said Jeff Klocke, Vice President at Pacific Park on the Santa Monica Pier. “And the fun is just getting started as we celebrate Pacific Park’s 20th Birthday throughout the holiday weekend.”

Standing 130 feet above the Pacific Ocean, the Pacific Wheel’s new 174, 000 LED lights are mounted on the Ferris wheel’s structure including the 40 spokes and two hubs. The illumination on each of the Ferris wheel’s spokes increased from 18 pixels to 64 pixels creating a new lighting package with 2,560 pixels, which is 1,900 pixels more than the previous system.

Pacific Park launched its month-long 20th birthday celebration with a “Lights Off” ceremony on May 5 and then proceeded each evening to illuminate one of the Ferris wheel’s 20 gondolas with a respective year to spotlight a Park milestone, starting with 1996. On Wednesday, May 25 all 20 gondolas will be illuminated in honor of Pacific Park’s 20th Birthday, which sets the stage for the Ferris wheel’s new lighting package reveal.