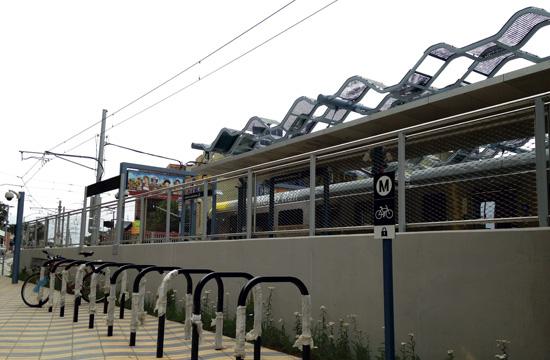 A total of 10 bicycle racks stand on the north side of Metro’s new Expo Line Downtown Santa Monica station. A further 10 racks have been installed by the City of Santa Monica on the south side. With Metro’s Expo Line opening to Santa Monica today, that means a total 40 cyclists will be able to lock their bikes to a rack, safe and sound at the station before heading east.

Santa Monica Bike Center has two nearby locations for some Santa Monicans to store their bicycles, up to 360 bikes can be racked for a $15/month membership fee (valet and yearly options are also on offer);  at 2nd and Colorado, and 4th Street and Broadway. The Center explained to The Mirror that they have not yet thought about limiting membership numbers, but will do so should capacity be reached. A third Bike Center location is being built at 2nd and Santa Monica with 100 spaces available.

Santa Monica City launched its GoSaMo campaign Wednesday, aiming to, “educate, equip, and excite people about the new transportation choices available…as part of the City’s strategic goal to enhance mobility, reduce congestion, and combat climate change.” Their new online hub can be found at smgov.net/gosamo and has some great resources to help plan trips around the city.

A Wednesday–morning walk–through of Expo’s mobility options with City of Santa Monica’s Planning and Community Development Mobility Manager Francie Stefan, saw Big Blue Bus and Breeze Bike Share as the standout front runners to get to the stations; there are 20 bike share bays, and new buses are aiming at reaching everyone, with all routes touching a Metro station at some point – park-and-ride is being actively discouraged via parking rate hikes.

There are none. Stefan explained that as part of Metro’s model, no amenities are included at the stations. The closest restroom to the Downtown Santa Monica Station is in Santa Monica Place, with new restrooms being constructed inside Parking Structure 5, but they are not open yet.

There is none. Expo Line patrons can head to coffee shops nearby for a drink, or find vending machines inside the local malls. Once again, Stefan explained, Metro does not allow for concessionaires at their stations.

While thousands of City and private parking spaces exists in Santa Monica, only 223 have been allocated for casual Expo riders. According to Metro, a total 544 parking spaces are available along the new Expo Line, with 321 sold to regular users.

BOGO (buy one get one) Big Blue Bus (BBB) rides and TAP credit is on now. You will need a TAP card to ride the Expo Line and the cards can be used on BBB and Breeze. To take advantage of the current BOGO promotion, head to City Hall or the Transit Store at 1444 4th St to buy your TAPs or to add the free credit.

Head to bigbluebus.com to find the quickest connection near you.

The City has opted out of creating their own app for mobility options, instead they have selected the best ones around and you can find links at smgov.net/gosamo

Expo Line rides are free today and tomorrow, with station parties and celebrations planned Saturday at each stop.

Santa Monica’s Open Streets Event June 5 is also promising to be a hit, for more information head to: smgov.net/gosamo.