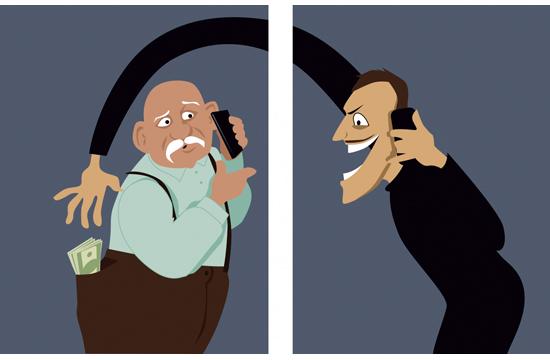 You may have gotten one of these messages yourself, and I hope you did nothing. When I got a similar call two months ago, I stayed on the line and kept asking “Are you with the United States Internal Revenue Service?” until the person hung up.

Another robocall (The L.A. Times makes one word of it; so will I) linked me to an obviously youthful salesperson who came on the line and informed me that his remodeling company would be in my area. When I interrupted with “No thanks”, he replied, “With all due respect, have you considered—“ … I came back with “If you had any respect for me, you would not interrupt my day with a sales pitch.” And then I hung up.

There’s something clearly uncivil about causing people’s home phones to ring just so you can get their ear to sell them something. And it causes you to be uncivil back. If some stranger rang your doorbell four times a day, you could call the cops. When they ring your phone just as many times, it’s “business.”

As far as phone fraud I think the significant change there is implying that the government is calling you, not some sad weasel in a basement somewhere hustling aluminum siding. As good citizens, and because we’re not billionaires, we pay our taxes honestly and thus become anxious at the thought of any possible problem we might be having with the real IRS. Call it the Willie Nelson reflex, after his well-known run in with the IRS.

In all of this is the troubling reality that it is going to fall to citizens to do something about this. Those who freely violate our privacy and seek to defraud us don’t seem to be creating enough concern for the federal government to step in and stop the invasion of our homes. But California House Representative Jackie Speier (D-Hillsborough) has introduced a bill in the state legislature that would require phone companies to offer free call-blocking technology to phone customers. Her Repeated Objectionable Bothering of Customers on Phones bill has the delightful acronym ROBOCOP. Leave a note at speier.house.gov to let her know you support that.

Robocalls make us angry, but what I find most troubling is the decay of decency in all this. My generation is getting older and that might have something to do with an increase in fraud schemes and robocalls. I know the economy is challenging, but who are these people that sit in a phone room all day and attempt to scare people into giving them money? True, the current political climate doesn’t exactly reinforce the Golden Rule but using false ID names on phone calls means someone is beginning a relationship with a lie. Fold that into the presidential race, add to that the misogyny and hate of Internet trolling, and then for desert consider how the entire engineering department at Volkswagen tampered with their exhaust system readouts to deceive customers and we seem to be swimming in a social order filled with pants on fire and stabbing Pinocchio noses. Cue the theme from “Jaws.”

A sad downside is that all this only makes it harder for legitimate non-profit organizations to raise funds. Almost every group I’ve donated to ends up calling me at home… for more. You realize the person on the other end is possibly doing noble work, even volunteering. You want to be kind. But all day your phone has been ringing with false ID’s showing on your phone. It just makes helping harder.

Nobody is hoping America will become a Merchant-Ivory film where those who wish to call upon another first send a hand-written note, and are then are greeted at the door by a butler. But at that time in history, there was a level of civility related to privacy in the home. In volunteering details of our lives to social media, did we also sign an agreement that our phones and our mail boxes and our doors (Yeah, YOU, local real estate people…) were there to be rattled at any time for any purpose?  I don’t remember doing that. By the way, in the time it took me to write this my phone has rung twice with fake ID’s showing. I mean, unless I do know a Roy in Anchorage, Alaska…